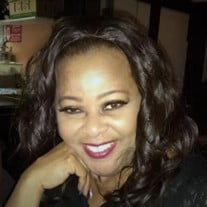 Grace Marie Bowers Lanier, affectionately known as mom and Gracie, was born in Chicago, IL on August 30, 1964 to her parents James and Bertha Bowers. She was the youngest of 9 children and was cherished as such. Upon losing her mother at a young age, Grace was welcomed to the home and family of Samuel and Verdina Davis. While growing up in Harvey, she attended school, began learning about the bible, dedicated her life to Jehovah and met a young man named Frank Colbert in 1982. The following year in May of 1983, she proudly graduated from Thornton Township High School. May 12, 1984, at the age of 19, she married Frank Colbert Sr. In January 1985, they moved to California. three years later, on October 24, 1988, to their surprise, they welcomed their two children (twins), Frank William Colbert Jr and Francheska Cierra Colbert into the world. For over 10 years, Grace took on the role as a single mother to her two children, until she met Russell Lanier in 2003. On May 19, 2005, she and Russell got married and not too long after welcomed their son, her “baby boy” as she called him, Gerren Mykal Lanier, who was born on July 28, 2005. Grace had an Entrepreneurial spirit. She started her career in Entertainment industry managing artists and comedians. She later found her passion in the Solar Energy Industry where she became a consultant and Sr Project Manager. She loved it so much that she would talk to everyone about it, just so they can get a solar panel. Grace loved helping the environment, she loved music and dancing to her favorite old school jams with her loved ones. She had many hobbies that she loved, some of which included giving facials as an aspiring Esthetician, makeup artistry, interior decorating, and event planning. Grace always made the best out of her life, from moving from California to Las Vegas, NV in 2018 to moving from Las Vegas back to her hometown of Chicago, IL in 2020 with her family, where she will be laid to rest two years later. On January 3, 2022, Grace Marie Lanier fell asleep in death. She is preceded in death by her parents James and Bertha Bowers, her siblings; James, Sidney, Verdina, Samuel, Leroy and Idella. Grace Marie Lanier’s memory will be honored and cherished by her husband Russell Lanier, her children Frank Colbert Jr, Francheska Colbert and Gerren Lanier, her siblings Jimella Fuller (Steven) and Grena Bowers (Kathleen), her extended family, Anthony Davis (Shirline), Derrick Davis (Marie) and Reena Davis, her nieces, nephews, cousins and a host of very special friends. Grace had a big heart and loved people. She had a bright light within her that shined in the hearts of everyone she loved and cared for. She had a beautiful soul with a smile that could light up a room. She was encouraging to anyone that was around her. She was a good mother to her children and a great friend to her friends. She will forever be loved and missed by many. She is and will always be, Our Amazing Grace.

Grace Marie Bowers Lanier, affectionately known as mom and Gracie, was born in Chicago, IL on August 30, 1964 to her parents James and Bertha Bowers. She was the youngest of 9 children and was cherished as such. Upon losing her mother at a... View Obituary & Service Information

The family of Mrs. Grace Marie Lanier created this Life Tributes page to make it easy to share your memories.

Send flowers to the Lanier family.