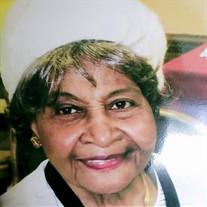 Celebrating the life of Amazing Grace H. Preston This Woman made a Difference... A child is born and matured through various stages of life, and if fortunate grows into maturity. The nature of the life ahead is unknown and can be filled with... View Obituary & Service Information

The family of Mrs. Grace Preston created this Life Tributes page to make it easy to share your memories.

Send flowers to the Preston family.