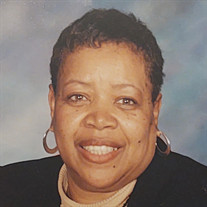 Gracie Lee Jones was born on December 1st, 1952 in Batesville, Mississippi, the fourth daughter and the ninth child of 13 born to Eddie D. Jones and Mozella (Foxx) Jones. Growing up in a house with 13 children and 4 grandchildren provided the opportunity for Gracie and the other siblings to engage in their own sports activities. It also provided individual tutors. Her older brother Ira taught her to read and to dance. Her older sister Betty taught her math. Like Gracie many of her siblings, as well as nieces and nephews became teachers. Their mom believed that an education should never be taken for granted. Gracie's mother died in 1965, while her sister Helen graduated in 1967. As a result, from the age of 14, Gracie was responsible for helping their father with the care of the children under her, namely James and BJ (Bobby). Gracie attended Patton Lane High School, until her last year, when she transferred to South Panola High School where she graduated. She then attended Northwest Mississippi Junior College, where she played in the band for several years. She transferred from there to the University of Mississippi (Ole Miss) where she received her Bachelors degree. After moving to Chicago and with the encouragement from her older sisters Betty and Helen, Gracie returned to school and received her Masters’ degree at the University of Illinois Chicago. Gracie retired in the year 2015. She was a special education, teacher for the last 20 years of her career leading to her retirement. When asked how she was she able to do this for so long, she always replied, “I never know what the day will bring, and no two days are ever the same.” She also worked as a Bank Manager for Citicorp Bank, and a Youth Education Director for the South Shore Commission. Gracie was active in her worship of God. Before she died she spoke of having meaningful conversations with Jehovah’s Witnesses on the phone, besides the conversations she had with her sister Doris over the years. Gracie Lee Jones will be remembered for her generosity and kindness to others. She will be missed by many. On March 13, 2021, Gracie Lee Jones died peacefully at the age of 69, at Advocate Christ Medical Center. In addition to her parents, she was preceded in death by her brothers Jesse (Martha), Robert Lee (Francis), IRA (Eula), Eddie Lee, and Bobby (Annie); her sisters Edna, Bettye (Eugene), and Helen (Willie). Gracie leaves to cherish her memory, her brothers Joe Willie (Diane), Nathaniel (Cassandra), and James (Lynn), and her sister Doris (Les) and a host of nephews, nieces, cousins, her sorority sisters and other friends.

Gracie Lee Jones was born on December 1st, 1952 in Batesville, Mississippi, the fourth daughter and the ninth child of 13 born to Eddie D. Jones and Mozella (Foxx) Jones. Growing up in a house with 13 children and 4 grandchildren provided the... View Obituary & Service Information

The family of Gracie Jones created this Life Tributes page to make it easy to share your memories.

Send flowers to the Jones family.