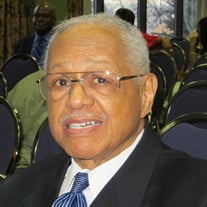 Harold Smith, Jr. was born on May 2, 1937 in Chicago, Illinois to Harold and Vesta Ivy Smith. He was raised in the area now known as Bronzeville and attended Wendell Phillips Academy High School. He joined the United States Navy in 1954, received a Good Conduct Medal and was honorably discharged in 1958. Harold met and married Martha DePriest. To that union were born four children. He completed college coursework and was trained to be a licensed electrician. Harold was united in marriage to Claudette Surles in 1967, and together, they raised four children. His daughter Valerie preceded him in death. Harold and Claudette shared 51 beautiful years together, always doing their best to apply the Bible's counsel for husbands and wives. They were an example to follow and an inspiration to many. After a study of God’s word the Bible, Harold dedicated his life to Jehovah and symbolized his dedication through water baptism in 1991, becoming one of Jehovah's Witnesses. He had the privilege of serving as an elder and was faithful until his death. Working as an electrician was his day job, but being a self-taught jack of all trades was his passion. Carpentry, plumbing, car repair, tile work, you name it, Harold knew how to do it. If he didn't know how to do something, he would find a book or a website to learn how to do it. He was known for his ability to fix just about anything, especially in the family home. If you visit the Smith household and ask Claudette, "who made this?" or "who installed that?" 9 times out of 10, the answer will be, "Harold." Harold was an artist at heart. He taught himself to play the guitar, build stringed instruments such as guitars and mandolins, paint and draw. One of his favorite songs to play was "Satin Doll." He built custom guitars for himself and others. Despite a long battle with terminal illness, Harold’s faith in God's promise at Revelation 21:3-4 was sure. During one of his many hospital stays in the final years of his life, he even said, "falling asleep and waking up in Paradise, what could be better?" He is now enjoying a well-deserved rest. "Friends of our God will never be forsaken. All those asleep who in God's memory stay, from death he will awaken. Then we'll come to see all that life can be: Paradise eternally." Rest well, Harold. Harold leaves to cherish his beloved memory: his wife, Claudette; his brother Edward (Barbara); his sons Harold, Anthony, Martin and Paul; his daughters Carolyn, Regina and Andrea; five grandchildren, three great-grandchildren, a myriad of nieces, nephews, cousins, and friends that have become family.

Harold Smith, Jr. was born on May 2, 1937 in Chicago, Illinois to Harold and Vesta Ivy Smith. He was raised in the area now known as Bronzeville and attended Wendell Phillips Academy High School. He joined the United States Navy in 1954, received... View Obituary & Service Information

The family of Harold Smith Jr. created this Life Tributes page to make it easy to share your memories.