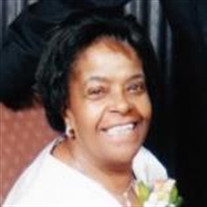 Born September 27/26, 1937 in Lumpkin, Georgia, first born of four children to Albert and Aurola Snipes. Her siblings were Rose Lee, Geraldine and Albert Lee Jr. Hazel was raised with her cousin/brother Andrew Porter by her grandfather Tom Porter and step grandmother Ms. Tilly. Hazel relocated to Chicago from Georgia in 1952. Hazel studied Millinery (hat making) in school and came out as an exceptional seamstress\tailor. This led to her being able to make the pattern and the suit her beloved John was buried in. Hazel was married to John William Carson in 1953 and from that union was born six children, Gilbert Carson (Donna), Darlene Lyons, LeFawn Wadley (Jim), Sterling Carson (Shawnese), Ava Brand, Tonya Yolo Watson (Leslie) and Calvin Porter (Kim), who she affectionately called her son. Hazel studied the Bible, learned about Jehovah, and dedicated her life by getting baptized in 1967 as one of Jehovah’s Witnesses. She has been faithfully serving him ever since. Hazel served as a regular pioneer for many years, dedicating her life to preaching and teaching people about Jehovah. This was her favorite thing to do. Hazel had a smile that could light up a room and a laugh that did the same with a twinkle in her eyes. One of her sayings was “you aint no better than nobody else, and aint nobody else no better than you.” Hazel loved, disciplined, and protected her children with everything she had. Hazel was preceded in death by her husband John William Carson, her father Albert Lee Snipes, mother, Aurola (Porter) Snipes, her sister Rose Lee Monroe (Bill), granddaughter Marielle Carson, and son-in-law Calvin Lyons. Hazel is survived by six children, 15 grandchildren, 13 great grandchildren, one sister, one brother, and a host of genuinely loved family members and good friends.

The family of Hazel Mae Carson created this Life Tributes page to make it easy to share your memories.

Send flowers to the Carson family.