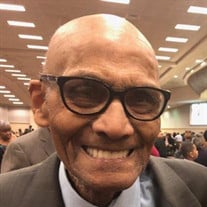 On July 24, 1922, in the city of Memphis, Tennessee, Henry James Martin and Lela Burts Martin had born to them a beautiful baby boy whom they named Henry James Martin. Henry had three sisters Leora, Dorothy Mae, and Rosalie and two brothers, Macon and LeRoy. In April 1923, the Martin family moved to Chicago, Illinois where Henry began his full and wonderful life of 97 years. Henry was raised by God-fearing parents and they taught young Henry to love the Bible. This greatly influenced him later in life. Henry had many interests while growing up. He loved sports and was quite a baseball player. Because of his love of music and spinning records, he was known as “Bebop” Martin. Henry enjoyed dancing and loved listening to music of all genres with jazz being his favorite. He especially loved listening to Ella Fitzgerald’s 1938 breakthrough hit “A Tisket A Tasket”. He also made sure that his of love of music was instilled in his children by paying for them to have music lessons. Henry was also a community activist and produced his own newspaper. Early in life, Henry displayed a remarkable ability to remember many minute details, such as the names of movie actors and actresses, song lyrics, song titles, etc. Later in life, he could recall many Bible verses by heart. And he could remember person’s faces and names even after not seeing them for decades. Throughout his life, he maintained a friendly, easygoing and cheerful disposition. And he could easily start conversations with anyone he met. In the early 1950s Henry was searching for spirituality in his life which was first awakened when he was child. One Sunday morning, while walking down the street Henry was given a handbill advertising the Sunday meeting. He went to the meeting and was deeply touched by what he heard and realized he found the truth that he was looking for all of his life. Henry made rapid progress in his Bible studies and was baptized on April 12,1952 as one of Jehovah’s Witnesses. Interestingly, Henry became well known for placing handbills and encouraged others to do the same. He was affectionately referred to as “Handbill Henry”. One Sunday, Henry was visiting another congregation. During the meeting he heard a young sister give a comment that changed his life forever. To put it in his words, “I heard her voice, I loved the sound of her voice, I loved her comment, I have to meet this sister!” The sister was a regular pioneer by the name of Dorothy Turner. Henry and Dorothy met that day this lead to a courtship and marriage. They were married on August 6, 1953. Henry and Dorothy decided to relocate and start their new life together in Rockford, Illinois. They started having a family in 1954 with the birth of their first child, Mark. Timothy, Lydia, Bruce and David followed. In August 1967, the Martin family moved to Chicago. Henry was an excellent father and provider. He sold Watkins products from door-to-door during the 1950s and 1960s. He was so good at selling household products that he became Watkins’ leading salesman for the entire country. In the 1970s, Henry started selling oil accounts for the Mobile Oil Company and become their best salesman. Henry was an excellent spiritual head. He always took his family to the congregation meetings and in the field ministry. Moreover, Henry conducted Family Worship sessions with his family. During these times he would often do re-enactments of Bible stories, which his children found to be unforgettable and they often recall with great fondness. He always took his family on various family outings including, movies, picnics, the park, museums and the sand dunes. Henry’s excellent spiritual example motivated his children to pursue spiritual goals as well as the full-time ministry. Over the years the Martin children and their mates have served or are serving as members of the US Bethel Family, regular and special pioneers, ministerial servants and elders. Henry served for many years as a regular pioneer and congregation elder. He was very approachable and used the Scriptures to help those seeking good advice. His advice to others would often be “Pray, pray and then pray some more”. Henry loved the ministry and over the years became well known for skillfully using the Bible when witnessing to others conducting Bible studies. Additionally, he was very good at placing Bible literature, particularly the Watchtower and Awake! magazines. Some months he would place over 100 magazines! And he had the privilege of studying the Bible with a number of persons and aiding them to the point of baptism. Henry deeply loved his wife Dorothy. He and Dorothy were married 63 years! Henry daily cared for Dorothy during her long illness until her death in 2016. On March 31, 2020, Henry fell asleep in death. He is preceded in death by his wife Dorothy, his sisters Dorothy Mae and Leora, his brothers Macon and LeRoy and one grandchild Armond Harper. Henry leaves to cherish his loving memories, his children, Mark Dwaine (Rosanell) of Mesa, AZ, Timothy Eric (Elizabeth) of San Diego, CA, Lydia Lynn (Herman) of Calumet City, IL, Bruce James (Cathy) of Chicago, IL and David James (Shannon) of New York; his sister Rosalie; two grandchildren, Bruce Jr. and Romell Martin; six great grandchildren, Knowledge and Amore Harper, Romell II, Alexis, Saniyah and Tristan Martin; and two sisters-in-law Valerie (James) McNish and Constance Martin. Henry will be sorely missed. We look forward to the future when we will see Henry in the Paradise and hear him say “Don’t take any wooden nickels”.

On July 24, 1922, in the city of Memphis, Tennessee, Henry James Martin and Lela Burts Martin had born to them a beautiful baby boy whom they named Henry James Martin. Henry had three sisters Leora, Dorothy Mae, and Rosalie and two brothers,... View Obituary & Service Information

The family of Henry James Martin Jr. created this Life Tributes page to make it easy to share your memories.

Send flowers to the Martin family.