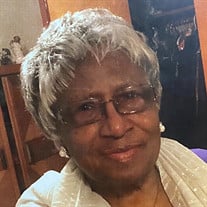 Hester Lee Nelson was born on September 12, 1930 in DeKalb, Mississippi. She was the daughter of Augusta Rush and Hester Alexander. As one of eight siblings, Hester was a pioneer in her family and community. She married Andrew Nelson in 1944, and from this union five children were born. In 1952, the family moved to East Chicago Heights (Ford Heights), Illinois. Hester served on the school board for four years and received a long time resident award from the city of Ford Heights. As an active member of Christian Valley in Ford Heights, Hester was a strong believer in serving the Lord and her church. She served on numerous committees including the Usher Board, Mother Board, and Finance Committee. She also received the Christian Valley Outstanding Mother of the Year Award. Hester was a rare jewel who was known for helping anyone with a need. Providing warm meals, financial donations, a place to live, or car ride were just a few of the ways she helped others. She provided a home and served as a caretaker for many ailing family members. Known for speaking her mind, Hester believed that a person should always speak the truth. When you entered her home, you could expect to be asked if you were saved, went to church, and if you had a job. She wanted all of her family and anyone that she encountered to be saved. Hester was very instrumental in coordinating the first Alexander-Shannon family reunion in Ford Heights in 1977-1978. She was involved with making sure the family reunions continued with the help of her husband, Andrew, and other family members. Hester worked for the Ford Motor Company for 30 years, before retiring as a cashier. She was always business minded. She owned and ran several successful family businesses, including a restaurant and gas station. Hester and Andrew, her husband, renovated and leased homes in their community. Hester departed this life on Tuesday, February 4, 2020. She was preceded in death by her parents Augusta Shannon and Hester Alexander; two loving daughters Corine Simmons and Jeanette Nelson; one sister Lucille Griffin; and four brothers Willie Alexander, Arthur Alexander, Milton Alexander, and Lieutenant Shannon. Hester leaves to cherish her memories, her loving and devoted husband for over 75 years, Andrew; four children Gusta Allen (Norman), William Alonzo Nelson (Jackie), Dorothy Lilly (Sylvester Ben), and Acy Shannon (Diana); one brother Leon Shannon; and a host of loving sisters-in-law, brothers-in-law, grandchildren, great grandchildren, great-great grandchildren, Godchildren, other relatives, and friends.

Hester Lee Nelson was born on September 12, 1930 in DeKalb, Mississippi. She was the daughter of Augusta Rush and Hester Alexander. As one of eight siblings, Hester was a pioneer in her family and community. She married Andrew Nelson in 1944,... View Obituary & Service Information

The family of Hester Lee Nelson created this Life Tributes page to make it easy to share your memories.

Send flowers to the Nelson family.