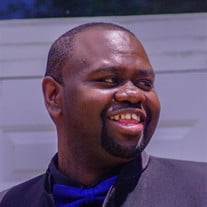 Ishamali Hamani Safi Weathersby was born on July 29, 1980, in Chicago Heights, IL at St. James Hospital to Lawrence and Emma (Smith) Weathersby. Ishamali’s childhood was filled with times of joy and love. He was spoiled by his parents, roughed up and guided up by his older brother, and protected and surrounded by his older sisters. Coming from a very large extended family, Ishamali was always in the company of aunts, uncles and cousins. There was never a shortage of people that didn’t have love for him. ​Ishamali was a 1998 graduate of Bloom High School in Chicago Heights. While in high school he was on the swimming team, the marching band, the drama club and became an International Exchange Student in Great Britain, Ireland and Scotland. When he wasn’t doing those things, he was holding down a few jobs and volunteering at the South Suburban Humane Society, where he cleaned cages, walked dogs and absorbed all the pet stink he could carry. ​After high school, Ishamali went on to attend the University of Illinois at Chicago. In 2003, he graduated with honors, achieving a Bachelor’s Degree in Architectural Engineering. Even though he was told that only 33% of the students entering the Engineering school would graduate, he had the audacity to take classes every summer semester at Prairie State College. ​Ishamali went on to work as a design engineer for both R and G Engineering and EN Engineering, where he held the different titles of CAD supervisor and senior drafter. He also earned the nickname, “The Finisher”, often working deep into the night to get projects finished. ​From 2001 to 2011, Ishamali was married to Ms. Katrina Genlick. Together their family grew to include 3 wonderful, handsome, great sons: Isaiah Jordan, Josiah Weathersby and Jeremiah Weathersby. ​As Ishamali continued to grow as a man and a father, during November of 2013 he began dating Ms. Tunesia Fuller. As they dated, laughed and smiled over the next few years, they decided they couldn’t be without one another and on June 27, 2015 they became Mr. Ishamali and Mrs. Tunesia Weathersby. From there they continued to build their life together. ​During the early 2000s, Ishamali gave his life to our Lord and Savior, Jesus Christ. Ishamali became a great soldier in the Army of the Lord. He went on mission trips to Los Angeles California where he and Tunesia fed the homeless, worked at the free clothing shop and prayed with anyone they could. After that time Ishamali never shied away from an opportunity to share Jesus Christ with anyone who would listen. ​Ishamali has been described by those that knew him as a man of love, kindness, peace and especially generosity. The person who would literally give you the shirt off of his back. He was always that person who was full of joy and had a smile on his face. ​Ishamali loved going to the movies. He loved to read and would read anything from science fiction and fantasy to anything that would help him be a better husband, a better father and a better man. Ishamali loved watches, hats and bacon. Ishamali was almost always the loudest guy in the room, with the biggest laugh, the biggest smiles and the biggest heart. He was someone who brought joy and great times to any party he was at. Throughout his life, Ishamali was influenced by people who truly loved him and always had his best interest at heart. Some of those people include: Dr. Willie Black, Pastor Donald Gordon, Mrs. Rose Jimerson, Ishamali’s special cousin-sister Beauty McClora and his great friend-brother Lee Henry II. ​On August 19, 2018, at the age of 38 years, Ishamali’s laugh, smile, booming voice and love were needed in Heaven and he was ordered home by our Heavenly Father. Ishamali was preceeded in death by his older brother Lanell Weathersby. ​Ishamali is survived by his loving wife, Tunesia Weathersby (nee Fuller); his sons Isaiah Jordan, Josiah Weathersby and Jeremiah Weathersby; his parents Lawrence and Emma Weathersby; his siblings, brother Lawrence (Eva) Weathersby, sister Larisa, sister Larina, sister Lanita, brother Erik (Gina) Weathersby, sister Motisola (Marlo) Jordan and sister Kemba (Gene) Dixon; and many aunts, uncles, nieces, nephews, and cousins who were all special to him. ​Ishamali will be truly and tremendously missed by all who’s lives he was blessed to touch. ​

Ishamali Hamani Safi Weathersby was born on July 29, 1980, in Chicago Heights, IL at St. James Hospital to Lawrence and Emma (Smith) Weathersby. Ishamali&#8217;s childhood was filled with times of joy and love. He was spoiled by his parents,... View Obituary & Service Information

The family of Ishamali Hamani Safi Weathersby created this Life Tributes page to make it easy to share your memories.

Send flowers to the Weathersby family.