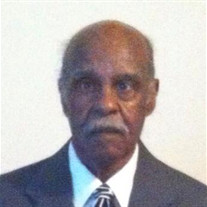 James Nathaniel Gary was born on May 15, 1939 to the union of Milton and Minnie Gary. He was the third of four boys. The Gary family migrated from Phenix City, Alabama to Ferndale, Michigan. James was educated in the Ferndale area schools, completing his high school graduation requirements in 1957 at Northern High School in Detroit, Michigan. It was in study hall while attending Northern that he met his prospective wife, Judith Hurd. Though their personalities were somewhat different, Judith’s social skills and quick-wittedness would balance his reserved demeanor. Among the commonalities they shared were home decorating and whistling and singing beautifully to jazz tunes! While “Jake” was dating Judith, he would have to walk from Caniff to Delmar Street with LP’s in his hand to listen to with her. Shortly after Judith graduated from Northern High School, James and Judith married on October 23, 1959. They produced four children: two boys and two girls! James enrolled at the University of Detroit with intentions of becoming an Art Major. As was aforementioned, he was a jazz lover, but he also enjoyed listening to classical music, was interested in painting artwork, and maintained his very stylized penmanship just because. After his brief attendance at the U of D, James found it more practical to except employment in the automotive industry, first with General Motors (Buick Division) in Flint, Michigan, for few years. Then in 1965, he was employed at Ford Motor Company in the Valve Body Department in Livonia, Michigan, where he retired in 1995 after 30 years of service. After working diligently during the week, James looked forward to the weekends so he could relax to activities he loved, such as playing Bid Whist with family and friends, working crossword puzzles, going fishing, watching various sporting events, especially baseball, or just simply taking in quiet time watching movie classics or his favorite TV shows. He lived a peaceful, modest life. “Judi” as he lovingly called his wife, preceded him in death in January 1998. As well, his parents Milton and Minnie, and his older brother Marion, have fallen asleep in death. Despite these losses, among countless others, James learned from an examination of the Bible of God‘s promise to resurrect the deceased. His study of God’s word gave him solace in knowing that “if a man dies, he can live again”. (Job 14:14; Hosea 13:14; Isaiah 25:19) James will be fondly remembered by his children: Armond (April) Gary of New Hudson, Michigan, Brian Gary of Detroit, Michigan, TreVae’ Gary of Country Club Hills, Illinois, and Ingrid Gary of Westland, Michigan; brothers: Milton Gary Jr. (Elizabell) of Southfield, Michigan and John Gary of Ferndale, Michigan; brother-in-law: Robert Hurd III; sisters-in-law: Caroline Gates, Marvis Price, Elaine Hurd, Valerie Stephens (Doyle), and Tonia Newell (Theodore); grandchildren: NaTasha Renee Gary, Darren Javier Tillman, Armond James Gary and Jimmere Judith Long; and a host of nieces, nephews, cousins, friends and others!

James Nathaniel Gary was born on May 15, 1939 to the union of Milton and Minnie Gary. He was the third of four boys. The Gary family migrated from Phenix City, Alabama to Ferndale, Michigan. James was educated in the Ferndale area schools, completing... View Obituary & Service Information

The family of James Nathaniel Gary created this Life Tributes page to make it easy to share your memories.

Send flowers to the Gary family.