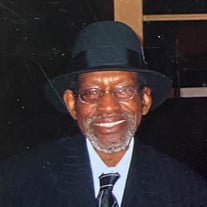 James Emmett Grant Jr. was born in Chicago, Illinois on March 19, 1927. He was the second child born to the union of James Emmett Grant Sr. and Willie Sue McIntosh. James attended Coleman Elementary School and Wendell Phillips High School and received his high school diploma after returning from the Army on March 5, 1946. He served as a Rifle-M1 Marksman in World War II, earning a Victory Medal and a Good Conduct Medal and Duty Soldier 590 of the Army Infantry. During his tenure in the Army, he served just over three months in Japan, and was honorably discharge on March 27, 1947. Upon returning home, he received his general education diploma and later secured a position as a Postal Clerk for the United States Postal Service where he served faithfully until his retirement. James was blessed also shortly after his tour in the Army to meet the love of his life LaVera, whom he affectionately referred to as “Strawberry”. They were wed on Valentine’s Day in 1949. To this union two children were born, Kevin Spencer and Felicia. James and LaVera were best friends, sharing a love of fishing, traveling, and dancing. They were also the anchors in the family, always helping family on both sides in times of need. They were married for 66 years until God called his Strawberry home on January 2, 2016. James went home to join his loving wife on February 29, 2020. He was also preceded in death by his grandmother Lelia Bell Grant, who helped to raise him after his mothers death when he was 6 years old; his parents James Sr. and Willie Sue; his brother Clarence; sister Lillian; and his son-in-law Ronald Preston. James leaves to cherish his memories his son Kevin Spencer Grant (Billie) and his daughter Felicia Grant Preston; five grandchildren Duane Lamar Preston, Karen Danae Grant, Renard Elliot Preston, Kevin Spencer Grant II (Ibi-Yinka), and Ciera LaShawnda Preston (Shimecka); six great-grandchildren Leah, Harper, Spencer, Zamir, Hunter, and Teddy; two sisters-in-law Eunice Ledger and Joyce Ledger; four nephews Richard Grant, Ernest Grant (Olga), Derrick Walker, and Robert Ledger; and a host of other loving relatives and friends

The family of James Emmett Grant Jr. created this Life Tributes page to make it easy to share your memories.

Send flowers to the Grant family.