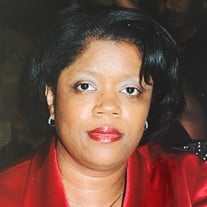 Janice Eudoria Shenault was born on February 16, 1960 to Jeanetta Shenault-Bivins. She was the third of eight children. Janice attended Einstein Elementary School and Donahue Elementary School. She also attended Wendell Phillips High School, where she graduated in 1978. When Janice was thirteen years old, her mother began a serious study of the Bible with Jehovah’s Witnesses. The entire family “had” to study, and this is how she was introduced to Jehovah. Janice, along with her sister, Faye, were both baptized together at Hawthorne Race Course in 1975. The family attended the Lake Meadows Congregation, which they would walk to for each meeting. A few years later she met who would be her husband for life, Pierre Sing, “Peedy” as she would affectionately call him. Janice and Pierre were happily married in 1977. Anyone who knew Pierre and Janice knew that Pierre loved her dearly. They would always say how much he spoiled her and he would say “isn’t that what a husband is supposed to do?” From the day they were married they were inseparable, often getting teased that if you see one the other is not far behind. From this union three beautiful children were born, Jasmin D. Sing, Jarrett P. Sing and Ashley T. Sing. Janice and Pierre were wonderful hosts, they had an open-door policy and everyone was welcome at the Sing home. Janice loved to read and do hair and she would often be asked to french braid other people’s hair, but particularly her sister’s. Janice was a home-body, but she didn’t mind going to gatherings, skating or bowling. She loved to sew and would often travel to Milwaukee with friends to buy fabric for her fashions. Janice was also a great baker. Some of her favorite things to bake were those good ole “lunchroom butter cookies”, her mother’s pound cake and homemade dinner rolls, all recipes that she lovingly passed on to her daughter Ashley. And if you ever stopped by the house on a Friday night, you could be almost certain that she and Pierre would be playing a game of Skip-bo or Phase 10, her favorite card games. Janice had a way of making people feel drawn to her. They loved her instantly. Family felt close to her and were saddened to learn that she would be moving out of state. So much so that some family even wanted to follow her. Her boss Holly and her coworkers all loved her and she always had good stories and fond memories working for the University of Chicago. Countless friends have such loving and funny stories to tell about her. So many memories of road trips, vacations, cruises, conversations with family and friends, Janice was a key part of it all. And she loved her family very dearly. From the cute and annoying nicknames that her and Ashley gave to each other, to the regular phone calls she’d share with Jasmin about cooking recipes and work advice, and Jarrett, her only son who would sneak into town to visit and surprise her at work. She was the perfect example of strength, in life, and as she battled her illness. As a wife, no husband could ask for one better. Janice, the dear wife that she was, was always supportive, always easy to get along with, rarely angry, always pleasant, and just a joy to be around. Pierre will always have pain in his heart knowing that she is not with us any longer. On Sunday, April 17, 2022, Janice fell asleep in death, but as a dear wife of 45 years, as a mother and as a sister, she will not be forgotten by all who loved her. For now, she is resting peacefully in Jehovah’s memory waiting to be awakened in paradise when all her family and friends will rejoice to see her again. Janice will not be forgotten by her husband of 45 years, Pierre; children, Jasmin, Jarrett (Patrice), Ashley (Anthony); her sisters Veronica “Faye” (George) and Genevieve (DeShawn); brothers Michael (Denise), Victor, Angelo (Darlene), Derrick (Cathy); her extended family and in-laws; and a host of nieces, nephews, and very dear friends. Janice is preceded in death by her brother, Stanley, her father, Oscar Rucker, and her mother, Jeanetta Bivins.

The family of Mrs. Janice E. Sing created this Life Tributes page to make it easy to share your memories.

Janice Eudoria Shenault was born on February 16, 1960 to Jeanetta...

Send flowers to the Sing family.