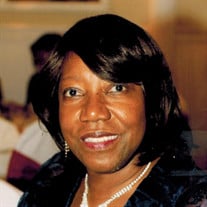 Jean Bryant was born January 10, 1949 in Marianna, Arkansas to Jesse and Marie McDowell. As a youngster, she was a prolific writer of original poetry. After finishing her former high school education, Jean continued her education and received an Associates Degree from the University of Phoenix. Jean was very skilled in her profession as an Executive Administrative Assistant and worked as such for, Illinois Gulf Central Railroad, and N.A.M.A., Independence Bank, and Waddell and Reed over the years. On October 24, 1970, Jane married Earnest Bryant and together they raised their family of three daughters. Jean was known for her ability in the kitchen as a cook and baker of delightful cakes and pies. However, in September 2008, something else took precedence in her life. That year, Jean dedicated her life to Jehovah God and became one of Jehovah’s Witnesses. She loved to share her faith in God‘s promises with others and extended her service to Jehovah by serving as a regular pioneer in September 2017 and loyally did so up until her death. Her hospitable and willing spirit to help others was a strength that endeared her family and friends. Jean Bryant fell asleep in death on December 20, 2019. She was preceded in death by her parents; two brothers Earl and Burl Lee McDowell; brother-in-law Frank Burgess; and her beloved grandson Taylor Anderson. Jean leaves to cherish her memories, her three daughters LaShawn (Bryan) Johnson, Patrice Bryant, and Erika (Charles) Backstrom; three grandchildren Victoria, Christopher, and Mya; one great grandson Taylor Jr.; five siblings: three sisters Ella Burgess, Alma Lewis, and Thelma Martin; two brothers Jesse (Mary) McDowell and Robert (Karon) McDowell; and a host of nieces, nephews, extended family, and friends to remember and mourn the loss of a good friend and family member. Jean’s absence will only be for a short while, as our faith in the resurrection fills us with the sure hope of being reunited in Jehovah God’s promised New World.

Jean Bryant was born January 10, 1949 in Marianna, Arkansas to Jesse and Marie McDowell. As a youngster, she was a prolific writer of original poetry. After finishing her former high school education, Jean continued her education and received... View Obituary & Service Information

The family of Jean Bryant created this Life Tributes page to make it easy to share your memories.

Send flowers to the Bryant family.