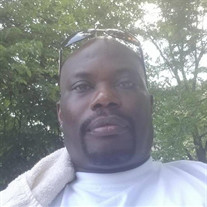 Jerome Franklin a resident of Chicago Heights, Illinois passed away on a Good Friday April 10, 2020 at 10:35 AM at the age of 56. Jerry is survived by his parents: Barbara J. Woods and Percy P. Franklin Sr., his sister and brother in law: Carmela and Kenneth Drake; his children: Renee Coleman, Jerlisa Coleman, Dejia Franklin, Keoshia Simon, Nicole Coleman, Destinie Armstrong, Jamir McClain; grandchildren: MaKayla, Rashaud, Denise, & Jada; & Great nieces and nephews- Melody, Moneasia, Raeshom, Naomi, Enzo, Nova. Jerome was preceded in death by his brother Percy P. Franklin Jr, and his nephew Japheth Harris, and grandson Jonathan Naraine Jr. Jerome Franklin better known as Jerry to family and friends was born November 4, 1963 in Chicago, Illinois to Barbara Woods and Percy Franklin Sr. As a child Jerry enjoyed hanging out with his older brother Percy who taught him how to move around the city of Chicago. He attended Rich South High School in Richton Park. He then went on to earn a Welding Certificate from Job Corps. He married Valarie Coleman in 1989. With this union he fathered to 2 children, Renee and Jerlisa Coleman while helping raise his stepdaughters Keoshia and Nicole. In 1999 he fathered another daughter Dejia Franklin with LaSaundra Lauderdale. Jerry was a devoted father, son, and brother. He loved spending time with his family especially his grandchildren. Jerry often described himself as “A man born to be a father.” He often drove to see his father in Atlanta, Georgia, determined to spend as much time as possible with him. He was known for being a hard worker and a problem solver who often took on difficult and unwanted projects. If you needed advice, you went to Jerry. If you wanted to borrow money, you better go somewhere else, because he was known for his “tight pockets”. Jerry loved his cookouts and House Music, and he also loved hanging with his family and friends. He loved to give you a hard time, but you always knew he loved you. He was a great role model and mentor, teaching his children about life’s challenges, and how to overcome them. Jerry started his welding career at Thrall Car as a welder apprentice. Jerry finished his apprenticeship and joined the Boilermakers Union Local 1 for 30+ years. He earned several honors and awards being recognized for his hard work and dedication. But for many years, Jerry lived to work hardly taking time off. However, towards the end he was preparing for retirement, homeownership and vacations. One of the last highlights of his short life was enjoying his first trip to Dominican Republic where he wanted to retire and live. Despite his life ending in illness, we can be thankful that he was able to enjoy some of his last days. Jerry will be deeply missed by his family, friends, and all who knew him.

Jerome Franklin a resident of Chicago Heights, Illinois passed away on a Good Friday April 10, 2020 at 10:35 AM at the age of 56. Jerry is survived by his parents: Barbara J. Woods and Percy P. Franklin Sr., his sister and brother in law: Carmela... View Obituary & Service Information

The family of Jerome Samuel Franklin created this Life Tributes page to make it easy to share your memories.

Send flowers to the Franklin family.