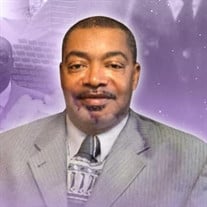 Jerome D. Williams was born August 7, 1964 in Itta Bena, Mississippi, to Clara W. Moore and Lieutenant Williams. He professed his faith in Jesus Christ at an early age at Christ Temple #2 under the leadership of Pastor Marcus Iron. He received his general education at Bloom Trial High School. Jerome then went on to receive a Biblical eduction at Moody Bible Institution and one at United Theological Seminary. During that time Jerome enlisted himself into the United States Army in 1982 and was honorably discharged in 1994. Jerome was licensed by his father David Moore Sr. to preach at Greater St. Mark Baptist Church. He was officially ordained in August of 1986 at South Suburban Missionary Church under Reverend Z.L. Dabrey. Jerome became Senior Pastor at Greater Friendship Evangelist Baptist Church in Chicago giving guidance to those whom God had entrusted under his leadership until 2005. He then joined his brother David Moore in assistanting to the Pastor at Greater New Mount Eagle Baptist Church. Jerome also worked for School District 169 of Ford Heights for 30 plus years were he enjoyed cooking for the youth. In May of 1988, he was married in holy matrimony to his beautiful wife Josephine Little. To this union they were blessed with three lovely children, Jovan Williams (Totiana), Jessica Williams, and Jackie Williams (Douglas Sr.). Jerome was also a proud grandfather of five Jovan Williams Jr., Trevon Williams, JaMyra Robinson, Trinity Williams, and Douglas Washington Jr., where he enjoyed spending time with his family Bar-B-Queing, going on family vacations and being their number one supporter. Also left to cherish his memories are his siblings, Shannon (Malcolm) Green, L.T. Williams, Barbara (Willie) Chark, Cara (Willie) Hobbs, Bernice Moore, Wannetta (Marcus) Coleman, James Moore Jr., Terry (Barbara) Moore, and David Moore; and a host of nieces, nephews, other relatives and friends.

Jerome D. Williams was born August 7, 1964 in Itta Bena, Mississippi, to Clara W. Moore and Lieutenant Williams. He professed his faith in Jesus Christ at an early age at Christ Temple #2 under the leadership of Pastor Marcus Iron. He received... View Obituary & Service Information

The family of Pastor Jerome D. Williams created this Life Tributes page to make it easy to share your memories.