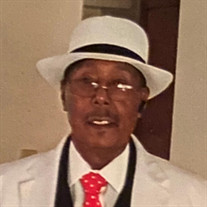 Deacon Jerry L. Allen was born September 2, 1945 in Bentham, Kentucky, to Lee Porter Allen and Carrie Lyman Allen. Jerry’s mother was called home to glory soon after his birth. He was adopted by the Thomas family. His adopted mother was also called to glory when Jerry was school age. Jerry returned to his father and his siblings. The family moved around many times prior to moving to Illinois. This is where at about 16 years of age he met his future wife Freddie Mae Slate. To this union 5 children were born. As a young man Jerry worked many jobs. He was a shoe maker prior to becoming employed at Midwest. Midwest name later changed to PPC Alliance. Jerry was a very active employee, and many saw his inner strength and compassion for people and their rights. He held one of the highest positions as a Quality Central Auditor. There at work, Jerry became involved in the union and served in many positions, helping fellow co-workers with grievances and fair representation. In his work he was given many accolades. There is one job that Jerry loved best! He held this job down until death. This job was most important because as a young man he accepted Christ and joined Christ Temple #2, under the leadership of Elder Marcus Irons. Jerry was placed in training and became a DEACON! As a deacon, Jerry rose to become a Trustee for the church and President of the Deacon Board. His tenure was served under 7 Elders: Elder Marcus Irons, Elder Willie Dean, Bishop David Robinson, Elder Benjamin Winn, Bishop Lindsay E. Jones, Bishop O.W. McInnis, and presently Elder Walter B. Futrell. Jerry always made it known how important it was to take Great Care of the Man of God. You would think that his two mentioned jobs would leave him no time for anything else. You couldn’t be more wrong, Christ Temple gave Jerry an accolade for “The Preacher Deacon” in March of 2004. He has many certificates and honorable mentions. He was well known for his electrical smile, flashy style for clothes, hats, and shoes. You could never out dress him. He would say, “Look at you trying to dress like me” and wait for it...a flash of his gold tooth and that smile. You might meet him as a stranger, but walked away with a new friend. After Jesus, Jerry’s joys were shining his car, keeping his yard on point and family! Yes, family he had a lot of that. He always kept and shared love to all. You might here him say terms like; there goes my favorite sister, look at my cool nephew, oh here is my best friend, look at my favorite niece, and that’s my best son-in-law. He had a way of making every one feel special. One thing I must mention is that any one that knew Jerry would hear him talk about his mother Catherine Turner Prescott. Jerry is preceded in death by his father Lee P. Allen; mother Carrie Lyman Allen; twin brothers Leroy and Lee Porter Allen; twin sisters Linda Williams and Linell Allen, Sarah Malone, Phyllis Turner; and a grandson Antaune Allen. Jerry leaves to cherish his memories, wife Freddie Mae Allen; two sons Jerry Allen Jr.(Tenae) and Phillip Allen (Devon); four daughters Phyllis Allen (Maurice), Mary Robinson (Keith), Karryie Williams (Ronnie), and Nichole Sanders; his adopted three children Keri Allen, Janae Allen, and Jakya Randle (Melvin); eight brothers Henry (Marlyn), James, Tyrone (Shirley), William, Alan, Timothy (Tiffany), Roger, and Antonio (Nacheo); five sisters Thelma Lee, Barbara, Yvonne, Sally, and Devetta (Anthony); 23 grandchildren, 38 great grandchildren, four sisters-in-law Rebecca Slate, Wilma Wilson, Henrietta Bailey, and Shelia Allen; a brother-in-law Freddie B. Slate: his brother from another mother Norman Allen (Gusta); under the union of Jerry and Freddie three God children were christened Marilyn (Darron), Armoni Barnes, and Manija Austin; special friends Freddie Wilson, Anthony Tucker, Bishop Linsey Jones, Pastor Benjamin and Mr. Clark; a play brother and Trustee Melvin Johnson; a host of nieces, nephews, other relatives, and friends. There are many special friends and God children but too many to be listed, Jerry shared his love to all!

Deacon Jerry L. Allen was born September 2, 1945 in Bentham, Kentucky, to Lee Porter Allen and Carrie Lyman Allen. Jerry&#8217;s mother was called home to glory soon after his birth. He was adopted by the Thomas family. His adopted mother was... View Obituary & Service Information

The family of Jerry L. Allen created this Life Tributes page to make it easy to share your memories.

Send flowers to the Allen family.