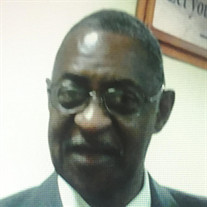 On Monday July 14, 1947 to the happy couple, Wade and Catherine McWright, a precious son was born whom they affectionately named Jewel (Clyde) McWright. To this union a daughter and doting sister was later born Ella (Mae). He also had an older sister Pearl. Jewel was born in Forest, Louisiana, but spent his first 9 years in Monroe, LA until the death of his mother Catherine in 1957 due to breast cancer. He and his sister moved to Oak Grove, LA where they were raised by their paternal grandparents Carson and Ella McWright. He attended Combs McIntyre High School. Jewel later moved to Chicago, Illinois in 1970, to be with his sister Ella whom he had a very close relationship with. In 1977, his father Wade died from a heart attack. Jewel had a very creative mind assembling model airplanes at an early age, even teaching himself how to drive a car. He loved a challenge learning to play chess, dominoes, and cards. He even tried his hand at baking, 7up cakes being his favorite, which he proudly shared with his friends. He enjoyed music and dancing. Jewel attended Carl Sandburg College in Galesburg, IL. He received various certificates as a Computer Programmer. He was employed as an IT Technician, a Traffic Manger for Audio Linear and Office Manager for Impact Audio. He received his Commercial Drivers License (CDL) and drove Interstate for Dieter Trucking and also worked as a Mechanic and other jobs along the way. Jewel was encouraged by the faithful example of his sister Ella who had become one of Jehovah’s Witnesses. After studying the Bible and being convinced he had found the Truth, he was baptized in January 1989 at Romeoville Assembly Hall. He pursued spiritual goals and served at one time as a Ministerial Servant and attended Pioneer Service School in August 2014. He loved sharing his beliefs about a coming Paradise and the hope of the resurrection where he looked forward to welcoming back his mother, father and many others. He always felt, you must not be judgmental, but be forgiving in order to be forgiven. Jewel met someone who became a complement for him, so he dated and later married Sheila Stacker on October 7, 2005. During those 15 years, 3 months, they remembered the marital vows they made before Jehovah and chose to remain devoted to each other until his death, peacefully at home, on Wednesday January 6, 2021. Those who will miss him the most, is his wife Sheila; his younger sister Ella and older sister Pearl (Robert); one daughter Angela (Hughie) Smith; three grandchildren Keanu, Hughie Jr. and Kaylah; one great granddaughter A’donna; nephews, nieces, other relatives and his large Spiritual Family. From the wife If only I would have known how much time there was left to show, the more love there was to show, the more comfort there was to give, the little time left to live with my love. For I shall wait till Jehovah gives Psalms 145:16 fulfillment “you open your hand and satisfy the desire of every living thing.” Surely our love last forever Sheila

On Monday July 14, 1947 to the happy couple, Wade and Catherine McWright, a precious son was born whom they affectionately named Jewel (Clyde) McWright. To this union a daughter and doting sister was later born Ella (Mae). He also had an older... View Obituary & Service Information

The family of Jewel C. McWright created this Life Tributes page to make it easy to share your memories.

Send flowers to the McWright family.