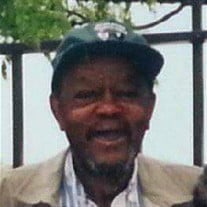 John Henry McBlackwell III, affectionately known as “Joe”, or “Mr. B”, was born in Charleston, Mississippi. He was the fifth of seven children born to Rosie King and John Henry McBlackwell II. Joe received his early childhood education in Charleston, MS and later migrated to St. Louis, Missouri where he cultivated his love for the blues. He later moved to Chicago, Illinois where he married Auris. Joe was employed at Hillman’s Bakery. He drove a Cab for more than 25 years, and was known simply as #2. Joe went on to work for Joslyn Manufacturing Company for more than 20 years until he retired in 1992. On October 25, 2017, Joe departed this earthly life. He was preceded in death by his parents, Rosie and John Henry II; his siblings, Katherine, Josephine, Roosevelt, Essie Louis and Ruby Mae; and his children, Barnard and Denise. Joe leaves to cherish his memory, the love of his life for more than 58 years, Sarah Lee; his children, Claudette (Stegl Jr.), Anita, Russell, Arnold, Sharen, Emile (Stephanie), Charlene (Douglas), Marcia and Harrietta; his only surviving sibling, Margaret; 24 grandchildren, over 80 great grandchildren and 20 great-great grandchildren and still counting; very close special friends, J.C. Wright, Percy Powell and John Moore; his beloved cousin, Earnest Rayborn; and a host of nieces, nephews, cousins and friends. Mr. B. will be very well missed by all the fellas.

The family of John Henry McBlackwell III created this Life Tributes page to make it easy to share your memories.

Send flowers to the McBlackwell family.