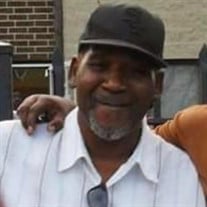 John Elroy Wilson was was born to John Henry Cook and Rebecca Wilson on June 23, 1958 in Chicago, Illinois. John was the oldest of six children. John attended Hendricks and Parkman Elementary schools and Tilden High School. He held various jobs throughout his life. John accepted Christ at an early age attending St. Joseph. John sang with various church choirs throughout his life. He exercised his passion for music by playing drums (congos) and singing. He was always walking and singing, making a party wherever he went. John was known all around town and always have a story to tell. His philosophy was “I’ll do it my way”. On May 20, 2019, John gave up his struggle and journeyed home. He was preceded in death by his parents John Henry and Rebecca; one sister Belinda; and one child Dalon. John leaves to cherish his memory, his lifetime companion and best friend of 26 years Bertina Mobley; three brothers Ronald Reeves, Emmanuel Wilson (Ortheria), and Dwayne Wilson (Trina); one special brother Maurice Shelton; one sister Michelle Wilson of Chicago, IL; his children Anntonette, Tamika (Will) of St. Paul, MN, John (Abby), Cody, Deshawn (Jewel), Rovone, Deleon, Delina, Terrell, Chemecca, Kameshia, and Tamyia (Maurice); one uncle Oscar Wilson (Felicia) of Chicago, IL; his best friend James Thomas (Shellia) of Tyler, TX; two special friends Afzal Sissiqui and Anish Vadiwala of Chicago, IL; twenty-two grandchildren; one great grandson; and a host of nieces, nephews, other relatives, too many cousins to name, and friends. 2 Timothy 4:7-8 I have fought a good fight, I have finished my course, I have kept the faith: Henceforth there is laid up for me a crown of righteousness, the Lord, the righteous judge, shall give me that day and not to me only, but unto all them also that love his appearing.

The family of John Elroy Wilson created this Life Tributes page to make it easy to share your memories.

John Elroy Wilson was was born to John Henry Cook and Rebecca...

Send flowers to the Wilson family.