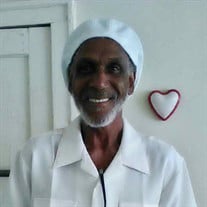 Johnny Morris was born August 6, 1953 to appreciative parents Georgia Morris and Peter Dale in Tunica, Mississippi. He was a very affectionate and loving son. He relocated to Chicago, Illinois at an early age with his mother and other family members. Johnny’s mother Georgia later married Henry Brunson, who helped to raise Johnny from the age of seven. Johnny loved his family dearly and became the kind of boy you could depend on. He ran errands for the neighbors and helped out whenever he could, whether he got paid or not. As a teenager Johnny became an athlete for Hirsch High School, and as a Hirsch Husky he ran track, wrestled, and played football, which he loved. This led him to Knoxville, Tennessee on a football scholarship with Knoxville College. While there he joined Phi Beta Signa Fraternity, where he forged lifelong relationships with his dear frat brothers. He met and eventually married a Tennessee native, Robin Roberts. Together they had two loving children, Erica and Timothy “Timmy Man”. Johnny eventually became an electrician and continued to reside in Knoxville, TN. Johnny later moved back to Chicago to care for his aged parents. Once again Johnny became the man to depend on to care for whatever you needed him for. He remained an active member of the Seventh Day Adventist Church. Sadly, Johnny died unexpectedly on February 10, 2018, at the age of 64. He was preceded in death by his parents Georgia “aka Gorgie” and Peter. Johnny leaves to mourn, his step-dad Henry Brunson, his son Timothy, his daughter Erica (Johnathan), his five grandchildren Kingston, Ezra, Adah, Titus and Amya, his six sisters Marvleen aka Tiny, Linda (Brian), Vernida aka Nina Pooh (Pat), Loretta aka Retta Ret (Robert), Shirley (Sam) and Debra (Stanley), and a host of nieces, nephews and many, many, other family members, frat members, church members and friends too numerous to count. He will truly be missed by all.

Johnny Morris was born August 6, 1953 to appreciative parents Georgia Morris and Peter Dale in Tunica, Mississippi. He was a very affectionate and loving son. He relocated to Chicago, Illinois at an early age with his mother and other family... View Obituary & Service Information

The family of Johnny Morris created this Life Tributes page to make it easy to share your memories.

Send flowers to the Morris family.