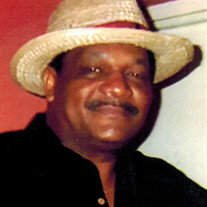 Joseph Palmer was born on August 26, 1949 in Carbondale, Jackson County, Illinois to Johnnie and Thelma (Taylor) Palmer. He was the seventh of eight children. He attended Attucks Grammar School and Carbondale Community High School, where he studied tailoring and played on the basketball team. After high school he served In the United States Army. Upon returning home he studied Criminal Justice at John A. Logan Junior College and went on to becoming a Correctional Officer. Joseph met Bonnie Jean when she was a freshman at Southern Illinois University in October during homecoming weekend. They married in October 1974. He and Bonnie moved to Chicago in the late 70’s, where they raised three daughters and one son. Joseph and Bonnie Jean were married for 44 years. Joseph rehabbed homes for a number of years before entering the United States Postal Service. He retired from the United States Postal Service in 2015. He studied the Bible with Jehovah’s Witnesses and often shared what he learned with others. He loved reading. Joseph and Bonnie would spend hours sharing what they read with each other. He enjoyed watching old Westerns, Film Noir, and basketball. He also liked to attend R & B and Jazz concerts. But most of all, he loved doting on his grandchildren Jai (LaVonnya), Savion (Niela), Jeremiah and Aria (Cicely). Joseph fell asleep in death on Saturday, October 27, 2018, at his home surrounded by his loved ones. He was preceded in death by his son, Isaac Josef Palmer; parents Johnnie and Thelma Palmer; nephew, John Christopher Palmer; and brothers Johnnie Palmer Jr., Leroy Palmer, and Lorenzo Palmer. Joseph leaves to cherish his memory, his wife of 44 years, Bonnie Palmer; three daughters, LaVonnya Celeste Harrell, Niela Ann Palmer-Price, and Cicely Renee Hunter; four grandchildren; his siblings, Barbara Jean Hildred (Truman), Deloris Henry (Grant), Emily Clarine Lyles, and Vickie Palmer-Maddox; and a host of nieces, nephews, relatives, and friends. He will be sorely missed.

Joseph Palmer was born on August 26, 1949 in Carbondale, Jackson County, Illinois to Johnnie and Thelma (Taylor) Palmer. He was the seventh of eight children. He attended Attucks Grammar School and Carbondale Community High School, where he... View Obituary & Service Information

The family of Joseph Palmer created this Life Tributes page to make it easy to share your memories.

Send flowers to the Palmer family.