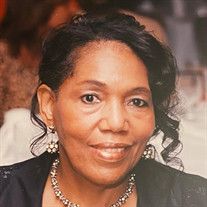 Josephine McSwain was born February 13, 1927. She was the sixth child to Jodie and Lucy Hawk of Huntsville, Alabama. Josephine moved to Chicago, Illinois in 1945 to be with her sisters, Marie, Bernice, and Tarnchie. This is where Josephine started her life of new adventures. She soon met and married King David Colvin. To this union King David Colvin Jr. “Peter” was born. Years later, on June 3, 1950, Josephine married Otha McSwain, who preceded her in death. From this union Otha McSwain Jr. “Mac” was born. Josephine was a faithful member of Shiloh Baptist Church on the west side of Chicago. Josephine was always a dedicated and hard worker. She worked at Bell and Howell for over 20 years. She was always about family and love. She wore many hats in the family as a teacher, cook, and driver. Josephine and Marie enjoyed playing baseball in the backyard with Otha Jr. and Robert Jr. Josephine and Otha Jr. would later move to the south side of Chicago where their home on 79th and Luella would become the center for parties and family gatherings. On January 8, 2021, at 3:41 a.m. surrounded by family, Josephine passed away. She was the last of her siblings to perish. She was preceded in death by her sisters, May Tommy, Bernice, Marie, and Tarnchie; and brothers Irvin and Cornell. Josephine leaves to cherish her memory, two sons King David Colvin Jr. and Otha McSwain Jr.; five grandchildren Chandra Colvin, David Colvin, Alexis Colvin, Courtney McSwain and Otha McSwain III; five great grandchildren McKenzie, Ryan, Christian, Stephanie, and Paisley; and a host of nieces, nephews, other family members, and friends that love her dearly.

Josephine McSwain was born February 13, 1927. She was the sixth child to Jodie and Lucy Hawk of Huntsville, Alabama. Josephine moved to Chicago, Illinois in 1945 to be with her sisters, Marie, Bernice, and Tarnchie. This is where Josephine... View Obituary & Service Information

The family of Josephine McSwain created this Life Tributes page to make it easy to share your memories.

Send flowers to the McSwain family.