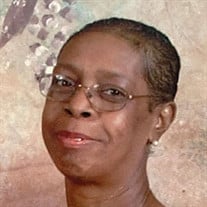 Juanita (O’Neal) Weaver was born January 4, 1947, in Chicago, Illinois to James Willie and Irene (Flagg) O’Neal. She was the 9th of 12 children. Juanita graduated from Hirsch High School and went on to attend Loop Junior College where she met Earl Weaver Jr. They later married and had three children together. Their marriage ended in divorce and through Earls subsequent marriage,Juanita was given an additional child whom she loved the same as her other three children. Juanita’s love of God led her to study the Bible with Jehovah’s Witnesses. After making the truth her own she symbolized her dedication to Jehovah through water baptism on July 15, 1975. Juanita loved the ministry and was active in sharing with others the hope of the Paradise earth. Her infectious personality, innate good will, and unshakeable faith showed throughout her entire life. Her last employment of 24 years was with the Chicago Police Department as a Latent Fingerprint Technician. She excelled in that position and was later promoted to supervisor where she retired with distinction. In her leisure time, Juanita used her creative skills and found an outlet that through baking cakes, hair styling, crocheting, and writing short stories. Juanita will be deeply missed. However, we find comfort knowing that she is at rest and free from pain. She was preceded in death by her parents James Willie and Irene Flagg O’Neal, and siblings Robert, Elvin, Algean, and Howard. She leaves to cherish memory, her loving children, Earl III, Edward (Rita), Jessica, and Khristina; three grandchildren; Emony, Trenton, and Kennedi; three great-grandchildren, Royal, Rich, and Remi; her siblings, Wilbur, L.C., James, Maurice, Janice, Barbara, and Derrick; and a host of nieces, nephews, and loving friends.

Juanita (O&#8217;Neal) Weaver was born January 4, 1947, in Chicago, Illinois to James Willie and Irene (Flagg) O&#8217;Neal. She was the 9th of 12 children. Juanita graduated from Hirsch High School and went on to attend Loop Junior College... View Obituary & Service Information

Send flowers to the Weaver family.