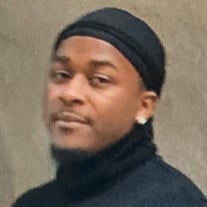 Justin Edward Christian Dunbar, 24, attended Nichols Middle School, Urbana High School, and was born in Evanston, Illinois. Justin is survived by his wife, Waynette Dunbar; his children, Justin Dunbar Jr. and Jeremiah Dunbar; his mother, Sonia Johns; father, Brian Dunbar; siblings, Carlton Johns, Ayesha Johns, Brian Dunbar Jr., Ryan Dunbar, Brianna Johns, Jermaine Nash, and Destiny Howleit; grandmother, Flossie Dunbar; grandfather, Richard D. Hicks; and host of aunts, uncles, and cousins. He is predeceased by his grandmother, JoAnn Johns, grandfather, Tucker Ivory Miles, and niece, Ry’Ola Dunbar. Justin was a husband, father, brother, and son. He was determined to be his best in each and his heart was as big as his ambition because he worked hard and took care of his family no matter what. Justin was loved by many and acknowledged by all because he had the charisma to inspire and influence anyone who spent more than five minutes with him. He was forgiving, loving, a.nd truly a kind soul. He was loyal, trustworthy, and would give his last to a love one in need without asking for anything in return. He would always say “Man my name J5” not because he was arrogant but because he knew he was the one and only and there would be no other like him. He went to Nichols Middle School, and Urbana High School where he met the love of his life and later his wife, Waynette Dunbar. Had his first born son, Justin Edward Christian Dunbar Jr., January 29, 2016. Had his second born son, Jeremiah Raheem Dunbar, November 21, 2018. He united in marriage, January 28, 2021. Justin was very much loved by his mother, siblings and relatives, and made special bonds with his in-laws. What his father-in law meant to him “To have someone who accepted me as a son, great father and husband made me feel like I was doing something right.” Those words were expressed throughout the years and motivated him to do better.

The family of Mr. Justin Edward Christian Dunbar created this Life Tributes page to make it easy to share your memories.

Send flowers to the Dunbar family.