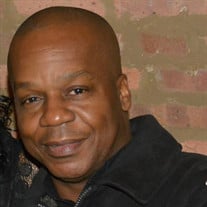 Kenneth “Lil Hulk” Johnson, 56, of Chicago, Illinois, passed away on December 17, 2021, after a long battle with prostate cancer. Kenneth “Lil Hulk” Johnson was born on February 22, 1965, to Lenora Johnson and Donald Tankson in Chicago, IL. It’s been said that “big things come in small packages”! Lil Hulk exemplified that statement in that he was a warrior, didn’t take any mess and most importantly he was a role model. Lil Hulk was also fun, funny, smart, helpful, and tenacious to name a few. He was in the United States Navy from 1984 to 1988, because he said he “didn’t want the streets of Chicago to be the death of him”! As a result of going to the Navy, “Lil Hulk” opened doors for himself to finish high school, obtain a Control Data Certificate in 1988, an Associates Degree at City Colleges in 2017, and attended Northeastern Illinois University until he passed away. He took on this education path because he loved computers and was on this education path because he loved computers and was nothing short of a genius when it comes to them. “Lil Hulk” was preceded in death by his father, Donald Tankson and younger brothers Eddie and Wesley Tankson. He never married but is survived by a son (Khalil Johnson) who is a direct representation of his looks and genius. He is also survived by his mother Lenora Johnson, stepmother Linda, brothers Darryl and Paul, sisters Carolyn, Teresa, Donna and Erin an abundance of nephews and nieces (great ones as well). Aunt and uncle Cecelia and Michael, many cousins Wanda, Andre Cretia etc. He’s also survived by many friends, Orlando, Dennis, Ricky, Vernon, James, George, and Brian. These are a few but I wanted to share about all the love Lil Hulk had. He is and will always be sorely missed!

The family of Mr. Kenneth Johnson created this Life Tributes page to make it easy to share your memories.