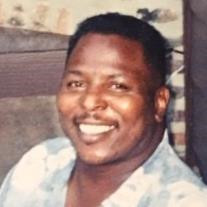 Kenneth Dwayne “Smokey” Williams Sr. was born on September 5, 1960 in Humboldt, Tennessee, to the union of Lester and Donnella Williams. Also to this union his brothers Kevin, Keith, and Kelly were born. Their mother Donella, preceded them in death. Later, he was blessed with a bonus mom, Lettie Williams, and siblings Kenny Ray, Linda, Chester, Gaynell, and Althera Monique. Kenneth attended Seigall Elementary School and then on to Humboldt Jr. High School where he was known as “Kung Fu Slaughter”. This is also where Kenneth’s love for music and dancing began to develop. Shortly after graduating, his mother and brothers moved to the Low End of Chicago, Illinois, where he attended Martin Luther King High School. After he graduated high school, he began his musical career as a member of The New Testament Band. In addition to music, Kenneth was known as a pillar in the community where he worked for the Chicago Housing Authority and was recognized for his outstanding work in the Ida B. Wells and Madden Park communities. His next community project was with Housing Bronzeville, where he was featured in the film, The Blueprint for Bronzeville, which raised awareness of the lack of affordable housing in the Bronzeville area. Kenneth met and married his best friend Marilyn “Ann” and to their union had four children, Charles, Kenisha, Kenneth Jr., and Keenan. Before their union, he was blessed with a beautiful daughter Kenyetta (Yolanda). From his children, he had 15 grandchildren Charles (Mari) Marcus, Carinn, Charles Jr., Kenyetta (Brian) Markenya, Kiyale, Allen, Donnell, Kenisha (Sekum) Kentrell, Kiwan, Kemora, Kenneth Jr. (Jackie) Jac’quel, Khali, Khalia, Kasayan, and Jacaia whom he loved dearly! He leaves to cherish his memory his father and bonus mom, Lester and Lettie; Aunt Bob; his sisters Valerie, Linda (Charles), Gaynell (Al), and Althera Monique; his brothers Cliff, Kenny Ray, Kevin, Chester, Keith, and Kelly; and a host of loving nieces, nephews, cousins, and friends!

Kenneth Dwayne &#8220;Smokey&#8221; Williams Sr. was born on September 5, 1960 in Humboldt, Tennessee, to the union of Lester and Donnella Williams. Also to this union his brothers Kevin, Keith, and Kelly were born. Their mother Donella, preceded... View Obituary & Service Information

The family of Kenneth Dwayne Williams Sr. created this Life Tributes page to make it easy to share your memories.