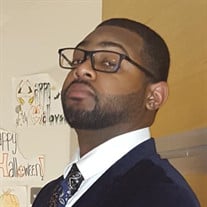 LaDonne “Don” DeAndre Jones-Hampton was born on December 21, 1985 as a healthy, beautiful baby boy and gift from God to Jessica Hampton and Darnell Jones. He accepted Christ as a child and was baptized at the St. John Missionary Baptist Church in Chicago. As a child, Don’s favorite entertainers were ‘The Boyz’ and ‘Kid and Play.’ Don wanted to be an entertainer like them. Don also really loved basketball and he played in many tournaments for his schools and church. He aspired to be in the NBA and wanted to be like Michael Jordan and Scottie Pippin. He always loved dancing and family cookouts where he enjoyed good food and joking around with family and friends. He especially loved laughing and talking to his best friend, Pastor Derrick Jones, Jr. Don attended Luella and Avalon Park Grammar Schools. He graduated from McKinley Middle School and attended Thornwood High School in South Holland, IL. Don grew into a witty, funny and hard-working young man. At the tender age of 20, he was blessed with a handsome baby boy, Khamari. At the age of 22, Don married the love of his life, Kierra Hollins where he was blessed with two more handsome boys Kavion and Kaidon. Don was a loving husband, great father and wonderful provider. His employment history included several jobs: The New City Health Center, Ford Motor Company, the US Steel Company and bit of day trading. On August 21, 2020, Don took his last breath and departed this world for an everlasting life with our God. He now rests with many other loved ones, including his little brother, Ronnie Jr. He leaves behind to mourn, his wife Kierra, mother Jessica, bonus father Ron Sr., father Darnell, step mother Natalie, and his mother and father in law Carolyn and Edward. He also leaves to cherish his memory, his three sons: Khamari, Kavion and Kaidon. Don leaves to mourn his Grandma E. Jones, and his grandmas in love, Doris and Ruby. Don is preceded in death by his great-grandmother Minnie Ruth, grandmother Darene and little brother Ronnie Jr. Don leaves behind his older brother Paul, his youngest brother Kyle, and his brother Darnell Jr. Don also leaves his one and only beloved little sister Sarena, to cherish his precious memories. He has a host of aunts, uncles, cousins, nieces, nephews, relatives, and so many friends, neighbors, coworkers, and acquaintances who will miss, love, and cherish him always.

LaDonne &#8220;Don&#8221; DeAndre Jones-Hampton was born on December 21, 1985 as a healthy, beautiful baby boy and gift from God to Jessica Hampton and Darnell Jones. He accepted Christ as a child and was baptized at the St. John Missionary... View Obituary & Service Information

The family of LaDonne Jones-Hampton created this Life Tributes page to make it easy to share your memories.

Send flowers to the Jones-Hampton family.