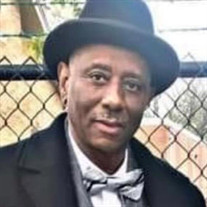 Larry Whitlock, affectionately known as “Whitlock” or “Lock”, was born August 26, 1957 to Ether and Luvenia Whitlock. Whitlock was a graduate of Bloom Trail High School and later went on to truck driving school and obtained his CDL (Commercial Driver’s License) and became a professional truck driver. His passion was always to drive trucks. Whitlock gave his life to Christ at an early age and was baptized in Meridian, Mississippi by his Godfather Reverend Charles Johnson. Whitlock worked in several leading trucking companies. He traveled many states and always made it home to his family. He later did regional short-haul driving for CWS Transport of Steger, IL and from his passion for driving, led into his son, Jarvis continuing in his legacy in driving trucks. Whitlock was known for his “GQ” style for fashion. No matter what occasion, he dressed from head-to-toe (matching hat, shoes, watch and all) and made a fashion statement at its best. He was a lover for music and ”DJing”. If it was a party and you needed a “DJ”, Whitlock and his friend, James Rogers made it happen. Whitlock had many friends, too many to name but he was genuine about all, including his long-time brother/best friend, Ozzie “Sonny” Foster. Whitlock was a phenomenal cook and griller. You could always find him fixing up a dish or two. And alongside him was his dark and shiny buddy, his dog, “Dino”. Whitlock made his transition on Thursday, May 6, 2021. Whitlock was preceded in death, by his father Ether Whitlock; his mother Luvenia Whitlock; his sister Ollie Mae Casey; and his brothers David Whitlock and Marvin Whitlock. Whitlock leaves to cherish his happy memories and love of family, his loving wife, Latrice Hamilton; his three sons Jarvis Whitlock, Jerriel Whitlock and Darius “Mookie” Hamilton; eight daughters Sheryl McFarland, Shardee Hamilton, Jamiah Woodard, Ashley “Pearl” Hamilton-Whitlock, DeJaney “Boogidee” Hamilton, Mikalah Wilson, Crystal Hollis-Whitlock, and Larissa Armstrong; six siblings Ether “Brooks” (Youricine) Whitlock, Eloise McFarland, Mildred Johnson, Luverta Wilson, Ozzie Foster, and Shari (Donald) Benson; twenty grandchildren; three Godchildren Tegan Casey, Kenya Simpson and Maryon Whitlock; Michael “Mike-Mike” King (nephew), who considered him as his brother-like figure; his hanging buddy nephews Ronnie and Christopher McFarland; dear friends Odell Hazely, Jeffrey Burk, Sonny and James; and best friend and dog “Nino”; and a host of nieces, nephews, other relatives and friends.

Larry Whitlock, affectionately known as &#8220;Whitlock&#8221; or &#8220;Lock&#8221;, was born August 26, 1957 to Ether and Luvenia Whitlock. Whitlock was a graduate of Bloom Trail High School and later went on to truck driving school and obtained... View Obituary & Service Information

The family of Mr. Larry Whitlock created this Life Tributes page to make it easy to share your memories.

Send flowers to the Whitlock family.