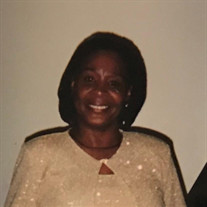 Lindra L. “Linda” Bursey was born Sunday, March 9, 1947 in Chicago, Illinois, the eldest daughter of Lionel T. and Dorothy L. (Phillips) Bursey. Linda proudly earned her certifications in Welding and Masonry accredited from Dawson Technical Institute and Kennedy King College in 1979 and 1980. In 1986, Linda changed career paths and became a Professional Child Care Provider where she became family to those she worked for. On Saturday, November 3, 1984, Linda gave her entire life to Jehovah God and Jesus Christ through water baptism. She stayed loyal, true and triumphant until her last breath. Although she desired to be a full-time pioneer, her health would not permit it. But that did not slow her down. Sister Bursey still brought in pioneer hours when she was able to. Nothing was more important to Linda then being faithful and true to Jehovah God and Jesus Christ. She preached to any willing ear happily, proudly and confidently. Although giving talks in front of the congregation terrified her, she would do her absolute best to please Jehovah on stage and her talks were Kingdom worthy. Linda lived a full, loving life of music, dancing, traveling, bike riding, and staying on top of the latest fashions and styles. She was a true trendsetter and she totally enjoyed herself. She was a tremendously strong woman who was devoted to Jehovah God and Jesus Christ. Linda was hard working and tenacious, helping whoever and whenever possible. She will be sorely missed by all she touched. Linda L. Bursey, 72, fell asleep in death on January 18, 2020 at 7:29 AM at the University of Chicago Hospital, due to multiple organ failure. Her passing was silent and peaceful, surrounded by family and a hospital staff member that treated her like family. She was preceded in death by one sister Diane (Donna) Bursey. Linda leaves to cherish her memory, her daughter Dyemeka; four grandchildren Brittany Dunner, Cordaro Bursey, Kylin Bursey, and Amari Bursey; nine great grandchildren Kiari Dunner, Zyshonne Avants, Kamal Tucker, Maaliah Tucker, Kylin Bursey Jr., Keyshyrah Bursey, Jace Bursey, Justice Bursey, and Jayden Bursey; four sisters Sandra Locke, Michiko Bursey, Diane (Gwen) Bursey, and Lionette Bursey; one niece Arwestra (Joseph) Coleman; two nephews Harry Locke Jr. and Anthony (Ashley) Burnett; and a host of other relatives and friends.

The family of Linda L. Bursey created this Life Tributes page to make it easy to share your memories.

Send flowers to the Bursey family.