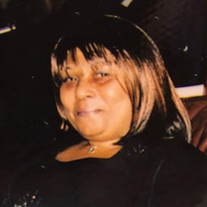 Lorraine G. Lewis was born March 15, 1948 to her mother and father Velma and Nathaniel Gideons in Albany, Georgia. To that union Lorraine later gained a brother Nathaniel Gideons Jr. Lorraine’s mother later moved to Chicago, Illinois with her two children Lorraine and Nathaniel Jr. and got remarried to Lonnie Warren. In that union Lorraine gained a step father and 9 additional siblings. Spending her younger years growing up in Chicago, Illinois Lorraine later grew accustomed to the city life but was often affectionately called a “Georgia Peach”. Lorraine was a beautiful person inside and out with a very pleasant spirit and stylish sense of fashion. Lorraine attended DuSable High School where she acquired a fond liking to hospitality. Eventually she began her career in that industry. Shortly after her career blossomed she met Willie Lewis and later they were married. To that union was no children, but Lorraine affectionately became one of the favorite aunts to all of her nieces and nephews. Lorraine worked in the hospitality arena for over 20 years because her personality was tailor made to work with people. She naturally had the type of aura that graced all who knew her. Her beautiful smile, jazziness, sophistication and kindness are just a few reasons why everyone adored her at her place of work and she also enjoyed every moment of her career until she retired. Lorraine studied with Jehovah’s Witnesses and began to appreciate the wonderful hope of paradise on earth that Jehovah promises in the future. Lorraine spent a great deal of time taking care of her grandmother Cozy Walker who preceded her in death. As time progressed, Lorraine became ill more often than expected so she joined households with her loving mom Velma Warren and helpful brother Martino Warren to help take care of each other. She was kind and loving to all especially her mom, they always shared a special loving connection and strong bond as they spent a great deal of time together enjoying each others company and caring for each others health as they grew older together. Lorraine loved arts and crafts, drawing, singing, listening to music and watching classic cartoons. She also loved to stay up to date on the latest fashion designs, as dressing up was her specialty. Just to add a touch of class to every outfit, Lorraine would pick the perfect fragrance and her signature style was to place a flower in her hair. All of her nieces enjoyed playing dress up with Lorraine as she taught many of them how to make their own original fashion statement. Her presence was a special gift, especially to a few of her nieces LaMonica Taylor, Maria McGee-Skeen and Nicole Snowden as they have been a great support system for Lorraine, her mom, her sisters, her brothers and the rest of our family. In the Spring of 2019, Lorraine was hospitalized and fell asleep in death on May 13th in Chicago, Illinois. She was preceded in death by her father Nathaniel Gideons, brother Nathaniel Gideons Jr., great grandmother Annie Lomax, grandmother Cozy Walker, husband Willie Lewis, brother Lonnie Warren Jr., step father Lonnie Warren, sister Monica Warren, brother Derrick Warren, brother-in-law Michael Mahon, and sister-in-law Melanie Warren. She will be greatly missed by us all. She leaves to cherish her unforgettable memory to her loving devoted mother Velma Warren, sister Glennye Redeaux (Robert Redeaux), sister Cheryl Mahon (Michael Mahon), brother Sandy Warren (Melanie Warren), brother Gerald Warren (Inetta Warren), sister Sonia Davis (Jeff Davis), and brother Martino Warren; two very special friends that are affectionately welcomed as family Doris Whittington and Kenneth Hayes; and a host of nieces, nephews and friends.

The family of Lorraine G. Lewis created this Life Tributes page to make it easy to share your memories.

Send flowers to the Lewis family.