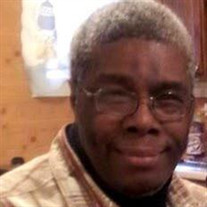 It is with deepest sorrow, we announce that Louis Thomas Parker, our most beloved son, brother, uncle, cousin and friend passed away on January 12, 2021, while home with his beloved, Jean. Those who knew Louis, know that a shining light in our lives was lost. Louis Thomas Parker was born June 17, 1945, in Clarksdale, Mississippi son of Milton and Effie Parker. The Parker family relocated to Chicago, Illinois where Louis enrolled and graduated from Creiger High School. Louis went on to further his education and talents by attending Allied Institute of Technology. Upon completion of his studies, Louis graduated and began his professional career at Western Electric, where he was an Electrician. As an avid professional, Louis started his own small electrical business where he provided electrical service to many. Louis enjoyed spending time with his family, playing the drums, cooking and dancing. Louis will always be remembered for his personality of quick wit and charm, being a great conversationalist, and most of all how much he loved and cherished his family! Louis had an infectious laugh that warmed the hearts of many. His presence in our lives will be sorely missed. Louis was preceded in death by his father Milton Parker, his sisters: Nellie Parker, Marguarite Smith (James), Elizabeth Pickens (Bernard), and Doris Parker Boykins (James); his brothers: Charles Parker, Emmett Parker (Lucia) and Michael Parker. Louis leaves to cherish his loving memory, his beloved soulmate Mildred Jean; his beautiful mother Effie Parker; four siblings: Otha Parker, Roney Parker, Shirley Parker, and Ella Huff (Kevin Huff): and a host of nieces, nephews, cousins and friends that love him dearly. Louis charismatic charm was received by his soulmate Jean where they soon began to build a life of their own. Below is an outpour of how Louis made an impact on our extended family lives. Granddaddy, In the 1970’s, Louis met Jean. He was God sent and a great man of integrity. They were united in Common Law for nearly 40 years. God gave Louis an assignment and a duty to fulfill and without hesitation he took that demand from God and gave it his all. He was firm, stern and demanded respect. Like a thief in the night he stole our hearts. It wasn’t easy at first, but it’s appreciated now. He was the best father figure and granddaddy a person could ask for. God requested and Louis delivered. He made our rocky roads smooth and our crooked roads straight. He left a footprint on our lives. He leaves to cherish his memory, his life partner Mildred Jean; daughters, Barbara, Sheila, and Michelle; son Jerry; granddaughters Twana (Isaac), Milici’a, (Yaakov) and Alpolonia (Herman); great granddaughters Shaqueria and Amelia; grandsons Albert, Jeremy, Demetrius, Rashad, Travis, Rashawn, and Deshawn; great grandsons Jalen, Christian, Milosh, Ameer, Noah, and Armon; and great great granddaughter Journee. Louis had one best friend who also happens to be his son-in-law, Chryst and a really good friend Don. Louis was a wholesome man, a wise man, a man who loved God, and a man who we had no choice but to love. He was a life partner, a God-given father, an uncle, a brother, a cousin, a friend, a son, and our granddaddy. To the Parker family thank you for sharing him with us. The Lord knew we needed him and he sent him our way. Granddaddy, thank you for showing up and showing out. We love you and will miss you immensely.

It is with deepest sorrow, we announce that Louis Thomas Parker, our most beloved son, brother, uncle, cousin and friend passed away on January 12, 2021, while home with his beloved, Jean. Those who knew Louis, know that a shining light in our... View Obituary & Service Information

The family of Louis T. Parker created this Life Tributes page to make it easy to share your memories.

It is with deepest sorrow, we announce that Louis Thomas Parker,...

Send flowers to the Parker family.