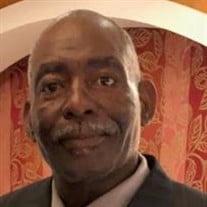 Lyle Delaney Abrams was born February 18, 1957 in Houston, Texas to Jacqueline Jones-Abrams and Joseph Abrams. He departed this earthly life on Thursday, May 14, 2020 at the University of Chicago Medicine, in Chicago, Illinois. In grammar... View Obituary & Service Information

The family of Lyle Delaney Abrams created this Life Tributes page to make it easy to share your memories.

Send flowers to the Abrams family.