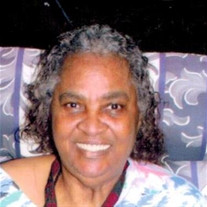 Marie was born on April 15, 1928 in Water Valley, Mississippi to Evan (Doc) and Corrine Phillips. She was the seventh child of eight siblings. Marie grew up and attended school in Water Valley, Mississippi. Marie joined the Green Goshen Church where she served as an Usher and sang in the choir. In 1955, Marie relocated to Chicago, Illinois where she met and married Joe McAtee Sr. Marie became the proud mother of nine children, William Woodard, Ruby J. McCoy, Coree McAtee, Mary McAtee Harris, Ann McAtee, Flora Henry Frazier, Joe McAtee Jr., Benton McAtee, and Shelley Fay McAtee. After Marie moved to Chicago, she began working as a waitress and a nurses aide. On June 6, 1998, Marie dedicated her life to Jehovah God and symbolized her dedication through water baptism, becoming one of Jehovah’s Witnesses. She regularly attended her meetings and had a full share in the field service until her health failed. On July 20, 2019, Marie fell asleep in death. She was preceded in death by her parents, her seven siblings, her husband Joe McAtee Sr., and one son Joe McAtee Jr. Marie leaves to cherish her memories 8 children, 21 grandchildren, 32 great grandchildren, 7 great-great grandchildren, she was blessed with five generations; and a host of nieces, nephews, other relatives, friends, and her spiritual sisters and brothers at the Kingdom Hall.

The family of Marie McAtee created this Life Tributes page to make it easy to share your memories.

Send flowers to the McAtee family.