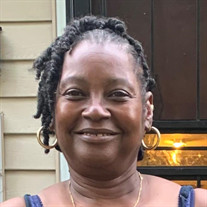 Marilyn Deneen Harris made her entrance into the world at St. James Hospital in Chicago Heights, Illinois on September 15, 1964 to the union of her parents Abell Harris and Marvie L. Kirk Harris. She was the fifth child of six siblings. Marilyn departed this life on May 3, 2021. Her education began in School District 169 in East Chicago Heights, IL now Ford Heights, IL. She attended Bloom Trail High School in Chicago Heights, where she graduated with Summa Cum Laude honors in 1982. After graduating, she attended Robert Morris College in Chicago, IL where she received her B.A. in Business Administration. Marilyn worked several years as Property Manager for the Chicago Housing Authority in Chicago, IL. Most recently, she was a dedicated Mail Carrier for the United States Postal Services in Park Forest, IL. Marilyn started her Christian journey at the age of six, by joining and being baptized at Christian Valley Baptist Church in Ford Heights, IL. She later joined First Union M.B. Church in the same city. She joined Flesh Becoming Word Church where she worked with the Intercessors Prayer Ministry and Youth Ministries. She loved God and lived her life according to his will. She was always willing to talk about God and discuss his word. She knew there was nothing too hard for God to do. She would often say when life gets more that you, can stand, kneel. One of her favorite scriptures was Proverbs 3:5. Her smile could brighten up any room! She loved to listen to music and was a self proclaimed D.J. Marilyn was the Barbeque Queen. She would pull out her grills any day and cook. There was a science to starting her grills and she took pride in seasoning her meat. Everyone raved about her food! Marilyn was a loving mother of four wonderful children who she loved dearly. She was the grandmother of eight adorable grandchildren who were her world. Two grandsons preceded her in death, Rylan Jamir Marquis Roberts and Julius Marlell Dee Roberts. She leaves to cherish her loving memory, her children, daughters, Rashita Marie Roberts, Raneisha Mone’y Roberts, and Rhonda Merielle Roberts; son, Ronald Marquis Roberts; grandchildren, Raiya Maloni Roberts, Kyree James Tate, Roman Jalon Roberts, Romell Marquis Roberts, Reylan Marlell Roberts, and Kamaree Ajani Tate; special nephew, Ladaruis Harris; God children, Dairelle Turner and Gerald Ingram; parents, Abell and Marvie Harris; sisters, Margaret L. French, Freida M. (Larnell) Foster, and Cassandra L. Harris; brothers, Shedrick E. (Kimberly) Harris and Abell D. Harris; aunts, Earnestine (Calvin) Bailey, Bertha Flannigan, Yvonne Rucker Franklin, and Marilyn Rucker Campbell; uncle, Oze Rucker; special friend, Deborah Richie; and a host of nieces, nephews, cousins, other relatives, and friends. Marilyn will be missed by all who knew her and loved her.

Marilyn Deneen Harris made her entrance into the world at St. James Hospital in Chicago Heights, Illinois on September 15, 1964 to the union of her parents Abell Harris and Marvie L. Kirk Harris. She was the fifth child of six siblings. Marilyn... View Obituary & Service Information

The family of Mrs. Marilyn Harris created this Life Tributes page to make it easy to share your memories.

Marilyn Deneen Harris made her entrance into the world at St....