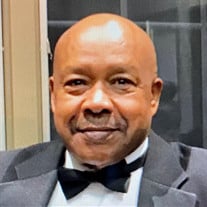 Marshall Calvin Hood, was born to Marshall Hood Sr. and Rosetta (Bobo) Hood. On March 25, 1945 in a small town in Oceola, Arkansas. Marshall was one of six siblings (Lonnie, Loretta, Deloris, James, Renee’). In the early 1950’s, his family migrated to Chicago, Illinois where he began his formal education. Marshall eventually completed his High School Education with a GED. At the age of eighteen, he enlisted into the United States Marine Corp and was sent to Vietnam. During the war, he was awarded several metals including the Vietnam Service Metal, The Good Conduct Metal, National Defense Metal and finally the Purple Heart Metal after being hit by a mortar explosion. Once discharged from the military honorably, Marshall returned to Chicago where he began working for a company called Ross-Viking/Harco as a Supervisor. He became one of the companies top Sales Reps during his time with the company. He joined JP Morgan Chase and retired from there at the age of 62. In 1969, he was introduced to Darlene (Jackson) Hood. After three months of dating, Marshall asked Darlene for her hand in marriage. They were married on September 1, 1971. They were married for 49 years. During the marriage, Marshall and Darlene raised and helped to parent six children (Marshall Tremaine, Marcus Corey, Justin Ellis, Kicia Danielle Baker, Charlotte Pointer Holloway and Christopher Kendall). After years of conversations with his mother, he made a promise to her to give Jehovah a chance. After her death, he began to study with his sisters and brother in laws (Rena, Willie, Deloris, and Steven). Marshall dedicated his life to Jehovah in 1981 and served Jehovah for 40 years. Marshall loved his family and friends. He was especially fond of all of his grandchildren, (Ashley, Miles, JaRon, Kennedy, Jonte, Jalen, Janiya and Janelle (who preceded him in death). Marshall was also especially fond of his travel buddies, Alicia Lawrence and Adrienne McCullough and his life- long friend Sam Jones. During his last days, Marshall was in constant reflection on his life. He greatly appreciated the host of family members and friends that helped him during his transition. He was grateful for all who took the time to send him thoughtful prayers and messages to make his days brighter. Marshall will forever be missed.

Send flowers to the Hood family.