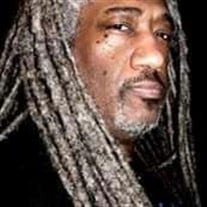 Martin "Bunty" Sanders was born to the union of Robert Sanders and Elizabeth Sanders (Neal) on May 2, 1958 in Chicago, Illinois. He was the youngest son of 7 children. Bunty, as most knew him by, attended John Foster Dulles Elementary school, Betsy Ross Middle School and graduated 3rd in his class of 525 students at Paul Laurence Dunbar Vocational High School, class of '76. At a young age, Bunty was very taken with all things music. He became proficient in many instruments from piano and keyboard, to saxophone and flutes. He received higher education at Howard University where he majored in music and was known for playing in and composing and arranging for the University's band. His career in music included traveling across the states and overseas playing keyboard for artists, including his wife. Bunty contributed his talents of writing and musical arrangements for a variety of artists such as The Jazz Ensemble, Elbernita "Twinkie" Clark, Rev. Clay Evans and the Fellowship Missionary Baptist Choir, Roberta Thomas, and Felicia Coleman-Evans. Bunty was a true entrepreneur, owning his own record company, recording for artists, and running a CD & DVD production company as well as T-shirt printing for a plethora of Chicagoland artists. Technology was also a talent of Bunty's. He carried the ability to build computers from scratch, website creating, graphic editing and design. He even authored and co-illustrated a comic book. Bunty, was a devoted husband to his wife, Roberta Thomas Sanders (preceded in death) who he shared four children with-Martin Robert "Boo" Sanders, Marlon Randolph "Bo" Sanders (preceded in death), Monae Elizabeth Sanders (preceded in death) and Monita Rachelle "Bit" Stanford (Sanders). Bunty leaves to cherish his memory, his beloved mother, Elizabeth Sanders (Neal), his son, Martin Robert Sanders, daughter, Monita Rachelle Stanford (Sanders), his siblings, Michael "The Slammer" Sanders, Myra J. Anderson (Sanders), Monica J. Jiles (Sanders), Marsha J. Sanders, Mallory J. Pinkney (Sanders), his granddaughters, Melaina and Maleah Stanford and his favorite and only niece, Phillis Wells. We acknowledge his dear brother, Marlon (Morty) Sanders (preceded in death). May we keep Bunty in our hearts and his memory as a loving family man and friend alive. The Sanders family are appreciative of every expression of sympathy and every act of kindness from all friends and family during their hour of bereavement. We give special thanks to Bunty's dearest friends, Felicia Coleman-Evans and Michael Evans, The Coleman Family, The Fulth-Bivins Family, Dwayne Armstrong, Tyrone Causey, Armirris Collins, Antoine Brumfield, Woola "Candy" and Steve La Flora, David Dillion and of course, The Weathersby Family. Words cannot express how much you meant to Bunty. Decades of love on key.

Martin "Bunty" Sanders was born to the union of Robert Sanders and Elizabeth Sanders (Neal) on May 2, 1958 in Chicago, Illinois. He was the youngest son of 7 children. Bunty, as most knew him by, attended John Foster Dulles Elementary school,... View Obituary & Service Information

The family of Mr. Martin Sanders created this Life Tributes page to make it easy to share your memories.

Martin &quot;Bunty&quot; Sanders was born to the union of Robert Sanders...