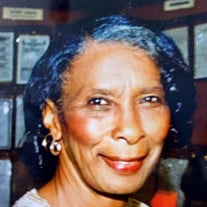 Mary Bell Bowles (affectionately known by her family as May Bell) was born on July 9, 1930 to Vanuel and Mary Willie Thompson of Kosciusko, MS. She was the oldest of four children: Thomas (called Jack), Dorothy and Seporial. Mary completed high school and attended college in Jackson, MS. Thereafter, she decided to join the army during the Korean War and was stationed in San Francisco, CA. She later realized that what she deeply desired in life could not be found in a military career. While serving she met a soldier named Maurice Bowles. They fell in love and married in September 1955, and they settled in Chicago. Mary had strong faith in God. However, in her adult life she never joined a church. She felt it was enough to pray to God on her knees every night and be a good person. In 1967, Jehovah’s Witnesses knocked on her door. She loved what she was learning from the Bible. However, her relatives were opposed; and her husband forced her to stop studying. To keep the peace, she complied but refused to join a church. Maurice never joined a church, either. Mary regretted that decision to stop her study. She later prayed to God for the Witnesses to come back and vowed not to let anyone stop her from learning about Jehovah. In 1973, she suffered the loss of her dear father. Grief stricken, she returned home from his funeral; there was a knock at the door. Jehovah God had answered her prayers. She studied the Bible secretly, knowing she would face her husband’s disapproval. With Jehovah’s help, she courageously stood up to him. Before his death, he admitted that serving Jehovah was what she needed. She symbolized her dedication to Jehovah and was baptized in March 1975. Everyone knew Mary loved the ministry. She auxiliary pioneered on a continuous basis while working full-time. She retired in 1988 from Weiss Memorial Hospital after 25 years as a nursing assistant. Then her real career as regular pioneer began. Mary never missed the yearly hourly requirement and continued as a pioneer until her death. Some of her joys were attending Pioneer Service School three times, working unassigned territory in the U.S. and Dominican Republic. Mary also encouraged others to join the pioneer ranks and reach out for Bethel service. She would get up at 3:00 am to meet her friends at 4:00 am, returning home in the evening around 7:30 pm. Mary loved to roller skate (never mastered it, even broke her arm) and absolutely loved playing cards with her girlfriends. As her nieces were growing up, Mary regularly opened her home for young sisters to enjoy each other’s company. Mary was always ready for a road trip. Even in her 80’s she still loved traveling and enjoyed attending family reunions. Mary fell asleep in death at home on Friday, January 22, 2021 surrounded by her family. She was 90 years old. Mary was preceded in death by her parents, her husband Maurice, her three siblings, her niece Zoretha Thompson-Griffin, sister-in-law Clara (Donald) Lawshea, and grandson Michael Darnel Bowles. She is survived by her three children: daughter JoAnn (Reginald) Brumby, son Michael (Linda) Bowles and son Leroy Bowles. Sister-in-law Dorothy Thompson. Nephews: Larry Thompson and Alfred (Kim) Jenkins. Nieces: Donna (Michael) Lawshea-Johnson, Karla (Daryl) Richardson, and Cyerah Jenkins. Grandchildren: Naurice (Troy) Walker, Leroy Bowles, Jr., Lonnel Bowles; ten great grandchildren, two great-great grandchildren and a host of family and friends. She was truly loved and will be dearly missed.

Mary Bell Bowles (affectionately known by her family as May Bell) was born on July 9, 1930 to Vanuel and Mary Willie Thompson of Kosciusko, MS. She was the oldest of four children: Thomas (called Jack), Dorothy and Seporial. Mary completed high... View Obituary & Service Information

The family of Mary Bell Bowles created this Life Tributes page to make it easy to share your memories.

Mary Bell Bowles (affectionately known by her family as May Bell)...

Send flowers to the Bowles family.