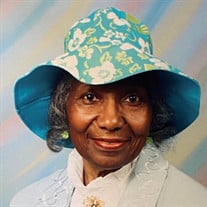 Mary Lou was born June 29, 1934 in Waycross, Georgia to Dave Richardson Sr. and Matilda Wheeler. Mary Lou worked hard to provide for her young family after moving to Chicago, Illinois. Mary Lou learned the truth at the age of 26. She dedicated her life to Jehovah by means of water baptism on August 27, 1960. Mary Lou loved sharing Bible truths with everyone she met. Teaching the Bible message was her passion, she encouraged everyone to learn about Jehovah especially her family. Mary Lou not only loved the truth she lived it. Her first congregation was Hyde Park, then Pershing Congregation where she met Frank Proctor. On June 29, 1968, Mary Lou and Frank Proctor were married, from that union was their son Timothy Proctor. After retiring, Frank and Mary Lou moved to Benton Harbor, Michigan. Sis. Proctor served as a regular pioneer for several years. She loved being at the meetings, she loved the friends, many times almost the last to leave. Mary Lou was affectionately known as Sister P. Mary Lou Proctor was truly a loving wife, mother, friend, grandmother, and great grandmother. Never did she meet a stranger. Because of advancing health issues she had to move back to Illinois with her family. Despite her failing health, her priority was being at the meetings until it was no longer possible. In the hospital’s everyone who cared for her knew of her strong faith and love for Jehovah God. On Sunday, January 12, 2020, Mary Lou fell asleep in death. She was preceded in death by her mother and father; husband Frank Proctor; brothers, Daley Jr., Dave, Willie, Levi, and James B. Richardson; and sisters Edna and Louise Richardson. Mary Lou Proctor leaves to cherish her loving memory, children Levi Richardson (Beatrice), Angela Aaron, Mary Louise Richardson, Deidre Ma Bane (Dennis) and Timothy Proctor (Carina); sister-in-law Sadie Richardson; and a host of nieces, nephews, cousins, grandchildren, great grandchildren, other relatives, and friends.

Mary Lou was born June 29, 1934 in Waycross, Georgia to Dave Richardson Sr. and Matilda Wheeler. Mary Lou worked hard to provide for her young family after moving to Chicago, Illinois. Mary Lou learned the truth at the age of 26. She dedicated... View Obituary & Service Information

The family of Mary Lou Proctor created this Life Tributes page to make it easy to share your memories.

Send flowers to the Proctor family.