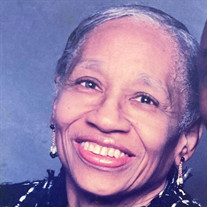 Mary Elizabeth Vaughn (Garrison) was born on August 9, 1936, in Ripley, Tennessee. Mary was the second child of Millard Garrison, Sr. and Mary Julia Vaughan, who along with her older brother, preceded her in death. In 1938 her parents relocated to Chicago (Bronzeville). In 1948, the family moved to East Chicago Heights, Illinois. As a young child, she helped her parents with cooking and the raising of her siblings. She accepted Christ and was baptized at Progressive Baptist Church. In 1959 she joined Payne Chapel AME Church in Chicago Heights. She received the gift of the Holy Ghost with the evidence of tongues there. In June 1989, she joined Pentecostal Church of Christ Cathedral under the leadership of Bishop Gregory St. James Dillard. Mary was an active member in all services including Bible class and served on the Mother's Board until her health started to decline. At the church picnics, Mother Vaughn was known to out jump all the young girls at Double Dutch, even until she was well into her sixties. She attended Francis Parker and Cottage Grove Elementary Schools. She graduated from Bloom Township High School in 1956. Mary worked at Aunt Cerrine Ware’s (Aunt Sister) store where she met the love of her life, George Washington Vaughn, Jr. On January 17, 1959, they were united in marriage, and from this union four children were born, George Washington, Delphine Gwendolyn, Frazier Lee and Stephanie Julia. ​Mary was a devoted wife and an affectionate mother who provided nourishing meals for her family. ​ She was very active in her community and was the treasurer for the Medgar Evers PTA during most of the years her children attended. Mary was a Girl Scout leader from 1969-1976 and again from 1984-1991. At one time, she took a Laundry position at Glenwood Terrace but then, felt her family needed her most. As an entrepreneur, in November 1973, she started selling Avon Products. Avon became her life and a passage for her to minister. Mary was always willing to help others. She made many friends while selling Avon products that made her customers feel beautiful. Mary was the Chicago Heights area second highest seller for years and won many Abby's (Avon’s highest award). She was able to help support her family with Avon and babysitting. Mary retired from selling Avon after 33 years. She made sure her children attended Sunday School and participated in the Easter/Christmas speeches in addition to the choir. Mary was their greatest fan and supported her children whether it was football, track, cross country, majorettes, pompoms, and band. She accompanied them to many churches while they were members of the Echoes of Christ Community Choir. She was the best seamstress and cook, who learned both at an early young age. Mary had a green thumb and would revive neighbors’ plants for them. She cherished her children and loved making homemade cakes and ice cream for their birthdays. She always told her children to follow their first mind and make good choices. On Sunday, February 16, 2020, at 4:48 am, Mary Elizabeth opened her eyes for the last time, saw her family, and then transitioned from this life to eternity. To celebrate her life today and to forever cherish her memory, are her devoted husband of 61 years, George Washington Vaughn, Jr.; two sons, George (Wanda) and Frazier (Danielle); four daughters, Delphine (Gregory) Dudley, Stephanie Jones, Dr. Shardon Jackson, and Latonia McQuitter; one brother, Millard, Jr. (Christine) Garrison; one sister, Marigold (Harry) Jones; two brothers-in-law, Francis (Jeannie) and James; two sisters-in-law, Arecia Steele and Diane Palmer; fifteen grandchildren, Venique, Victoria (Ricky), George M. (Kenya), Ivory, Evan, Jordan, Millard, Dalvonte, Elyse, Sha-kira, Julia, Overton, Carmira, Tracy (Courtney), and Nathan (Sadie); fourteen great grandchildren, Ariel, Keon, Travarus, Carson, Isaiah, Joshua, Faith, Mayjor, Deon, Micah, C.J. (Bre), Taylor, Charis, and Nathan Jr.; one aunt, Lennie Copeland; one God-brother, Danny Terry, Sr.; and a host of nieces, nephews, cousins, and friends.

Mary Elizabeth Vaughn (Garrison) was born on August 9, 1936, in Ripley, Tennessee. Mary was the second child of Millard Garrison, Sr. and Mary Julia Vaughan, who along with her older brother, preceded her in death. In 1938 her parents relocated... View Obituary & Service Information

The family of Mary Vaughn created this Life Tributes page to make it easy to share your memories.

Send flowers to the Vaughn family.