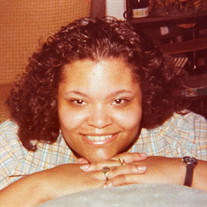 On May 6, 1959, Mauria Linda Byrd was born to the union of Laura A. Anthony and John Anthony. She was the third oldest child of six. Mauria attended Burke Elementary School from kindergarten to 2nd grade, Walter Q. Gresham from 3rd to 8th grade, and Calumet High School from 9th to 12th grade where she graduated in 1977. Mauria loved cooking, sewing, and taking care of her siblings. The one thing Mauria loved most was serving her God Jehovah. On January 14, 1973, Mauria symbolized her dedication to Jehovah through water baptism, becoming a Jehovah’s Witness. Through her service to Jehovah she met Larry Byrd. Not long after dating, Larry asked for her hand in marriage at a local Homerun Inn Pizza Restaurant. On June 3, 1978, Mauria and Larry pledged their vows to one another through Jehovah God. Mauria and Larry loved to travel together. On February 1, 1985, Mauria gave birth to a healthy baby boy and named him Larry Byrd Jr. For the next eight years the three traveled the world together and took care of one another until August 5, 1993, when Mauria gave birth to a beautiful baby girl named Chloe Lynn Byrd. Mauria loved to take care of her husband and two children. She was a loving mother and capable wife. During the years of 2004 to 2007, she worked for Custom House Keeping until she became ill. In 2007, Mauria lost her sight to diabetes. Despite Mauria’s health she continued to push through for her family. In 2010, she became a grandmother to her first grandson. Her love as a grandmother was unconditional. Mauria did everything she could to help her family and her friends. In 2017, she welcomed her second grandson into the world shortly after her illness began to deteriorate but she kept fighting to see her grandsons grow up and to see her family in the best position possible. On December 22, 2019 at 1:29 p.m., Mauria fell asleep in death. She was preceded in death by her mother Laura A. Anthony; mother-in-law Ruby Byrd; two aunts Yvette Elletby and Louise C. Burks; and brother-in-law David Byrd. Mauria’s memories are left to be shared by her husband, Larry Byrd Sr.; (his sister Sheila L. White and her son Maurice White and her former husband Charles White; his brother Cornelious B. Byrd Jr. his wife Eula Byrd and their three children Gabriel Byrd, Tara Broadway and Eric Byrd); niece Dana Byrd; sister-in-law Dee Dee; two children Chloe Byrd (Rogers McElroy Jr.) and Larry Byrd Jr. (Aisha P. Byrd); two grandsons Gavyn Larry Byrd and Rogers Timothy McElroy III “aka Blue and Grover”; five siblings along with their children and grandchildren Gale Hale (Lawrence Hale - LJ, Ladonna Wooten – Mackenzie Charm Wooten, Lebron Hale Jr.,) Marlon and Simone Anthony (Marla Anthony - Tylia Wiley, Britney Corbett), Darrin Anthony, Greg Anthony, and Darla Anthony (Rashawn Carr – Erica Jewel, Raniece Carr – D’Kari and Kaliyah, Dexter Jackson, Jarrell Jackson, Daniel Carr and Randall Carr); best friends Sheryl Rowe (Vernon Rowe), Gayle Winfrey (Emmanuel Winfrey), Vicki Glowa (Stanley Glowa), Mildred Ford, Terry Imala and Jocelyn Stallings; and a host of other relatives and friends too numerous to mention. Mauria will be truly missed. Her loving, caring, and comical personality is left within all of us. She remains in Jehovah‘s memory until the new system where she will awaken.

On May 6, 1959, Mauria Linda Byrd was born to the union of Laura A. Anthony and John Anthony. She was the third oldest child of six. Mauria attended Burke Elementary School from kindergarten to 2nd grade, Walter Q. Gresham from 3rd to 8th grade,... View Obituary & Service Information

The family of Mauria Linda Byrd created this Life Tributes page to make it easy to share your memories.

Send flowers to the Byrd family.