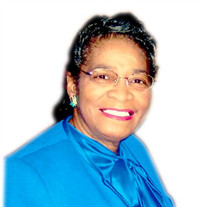 Mayola Hardy was born September 5, 1936 from the union of Johnny Harvey (farmer) and Alice E. Wilkins (homemaker) in the tiny town of Battleboro, North Carolina. Mayola worked on the family farm as one of 12 children, but later spent most of her adult life in Brooklyn, New York. In May 1967, Mayola came to Chicago with her daughter, finding a job as a seamstress. That job appeared to be the right fit as it remained her chosen profession for over 40 years. An avid bowler who was known to beat many a male challenger, Mayola accepted an invitation from a bold, young workmate who dared challenge her to a bowling match. She would later marry that challenger on August 2, 1974 at Chicago’s City Hall. Early in marriage, Mayola was disturbed by what she saw and heard in the Baptist church she and her husband attended, but was determined to have her questions about God answered directly from the Bible. She then began a systematic study of the Bible with Lillie Ingram - one of Jehovah’s Witnesses - and progressed to dedicating her life to Jehovah God. Mayola symbolized her dedication by water baptism on March 24, 1984. Immediately after her baptism, Mayola said to her husband, “I want to be a pioneer!” as her greatest joy came from sharing in the ministry to help others find the Bible’s answers to their questions. Very often she accompanied and was trained by another zealous ‘pioneer’ publisher - Audrey Adams. Mayola finally realized her desire to engage in this ministry full-time by successfully applying to become a regular pioneer publisher. And on September 1, 1998, she began, faithfully carrying out this assignment for the rest of her life despite her declining health. Over the years, many folks have learned a thing or two from Mayola. She taught several people how to sew. She taught even more how to play cards! Since her first bout with pneumonia in the late 80’s, she’s taught many hospital nurses and clinicians about Jehovah. For over 37 years (22 years as a full-time servant), Mayola preached to countless individuals regarding Jehovah‘s purpose for mankind and each day grew stronger as a communicator, kind educator and most importantly - faithful worshipper of Jehovah God. On January, 28, 2021, after returning home from her final stay at the hospital, Mayola Wright fell asleep in death. (Heb. 6:10, Job 14:13-15)

Mayola Hardy was born September 5, 1936 from the union of Johnny Harvey (farmer) and Alice E. Wilkins (homemaker) in the tiny town of Battleboro, North Carolina. Mayola worked on the family farm as one of 12 children, but later spent most... View Obituary & Service Information

The family of Mayola Wright created this Life Tributes page to make it easy to share your memories.

Mayola Hardy was born September 5, 1936 from the union of Johnny...

Send flowers to the Wright family.