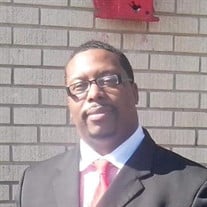 Michael Maurice Mackey was born on September 26, 1982 in Chicago, Illinois. Raised in the city of Ford Heights, IL by his mother Aretha Mackey, Michael would achieve his basics studies through School District 169. After excelling to high school, Michael would later graduate from Bloom Trail High School of District 206 in 2000. He continued his education by pursing a degree in business at Prairie State College of Chicago Heights, IL. Michael surrendered his life to the ministry of Jesus Christ on December 9, 2001. From that day until the day he was called home to Glory, he was devoted, dedicated and loyal to soul winning and encouraging everyone he came in contact with. Michael’s love for the Lord and passion for serving people led him to be apart of many street and youth outreach ministries throughout the Midwest and extending to his current hometown of San Antonio, Texas. He was worldwide known for his love for volunteering which afforded him an even greater opportunity to leave his stamp on this world. Michael founded the “Help Feed the Homeless” non for-profit organization who’s focus was geared towards raising funds to assist the homeless, less fortunate and widows which Michael deemed as a direct mandate from God. His passion for music led him to also become the founder of Royal Priesthood Music label. The proceeds from this entity would be donated in efforts of supporting his non for-profit organization, “Help Feed the Homeless”. In 2003, he would meet the love of his life, Danielle Alston while being a member of Holy Ghost Deliverance center under the leadership of Pastor Rodney Hutton. Michael was ordained as Minister under Pastor Hutton and served faithfully until his next assignment. In 2005, Michael would marry his queen and to this three amazing children would be born; Elijah (14), Zion (12), and Zamar (3). Michael and his family relocated to San Antonio, TX in 2013. Upon arrival, he immediately founded his church, The House of Deliverance Worship Center. His devotion to the work and the will of the Lord was not just within the four walls of the church but it extended wherever he went and to whomever he came in contact with. Being an entrepreneur at heart, his big dreams, (as he would call them), along with his faith, led him to start his own business, God’s Quality Cleaning Business. His dedication to provide five star service helped in his efforts to have an outstanding reputation. His life and ministry came to an abrupt end at his home on March 16, 2020 at 9 a.m. with his wife and children by his side. Michael was proceeded in Death by both his maternal and paternal grandparents, his mother, Aretha Mackey and his father, Felipe Morrow. He leaves to cherish his memories, his loving wife of 15 years, Lady Danielle Mackey; his (3) beautiful children, Elijah, Zion and Zamarr; (2) sisters, Antoinette Mackey and Connie Cruzado; (7) brothers, Albert Turner, Pierre Turner, Tyjuan Turner, Lenell Turner, Korrie Morrow, Kortez Morrow, and Keshawn Morrow; he also leaves a host of nieces, nephews, aunts, uncles, cousins and dear friends.

Michael Maurice Mackey was born on September 26, 1982 in Chicago, Illinois. Raised in the city of Ford Heights, IL by his mother Aretha Mackey, Michael would achieve his basics studies through School District 169. After excelling to high school,... View Obituary & Service Information

The family of Michael Maurice Mackey created this Life Tributes page to make it easy to share your memories.

Send flowers to the Mackey family.