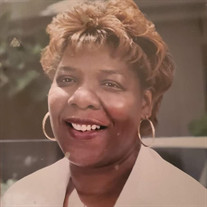 May 23, 1952, a perfect flower bloomed to Grady and Leanna Washington named Millicent “Mill”/“Millie”. Mill accepted Christ at an early age and was baptized at Progressive Baptist Church. She was a fine student out of the Chicago Public School System where she attended Parkman Elementary and DuSable High School. While she was in the seventh grade, Mill caught the heart of Gerald Haron. She was the apple of his eye. Later, he decided that he would ask Mill to marry him. In March 1973, they made it official. To this union, two awesome children were born, Crystal and Cortez. Her children were her pride and joy. She taught them to be respectful, loving, and most importantly, to love the Lord. Every Sunday morning, gospel music graced the Haron home and every Saturday, nothing happened until all the laundry was done and her home was clean. Mill had various jobs, but in 1974, she started working at the Hyatt Regency of Chicago as a Cook. There, she became known to friends and coworkers as Millie. She was a well loved and respected employee for 45 years. Mill loved to travel and would take an annual trip with two of her cousins. Cooking, gardening, and “going to the boat“ were some of her favorite pastimes. On Fridays, you would always catch her and her sisters having a spirited card game with friends. On Saturday mornings, when you saw one Daisy, you were sure to see the other two carrying out their to-do list for themselves and their families. Mill became known as the enforcer. She was hard on the outside but had a pure heart of gold. If you needed it and asked her, it was soon to become yours. Millicent loved going to the Goodwill stores and to her favorite store, Dollar Tree. During the block parties, you could count on Mill to have a table set with nachos, pop, juice, and hotdogs for anyone who stop by. 2019 proved to be different. Every holiday, Mill made sure her house was beautifully decorated. This was something that everyone in the neighborhood grew to love and look forward to. 2019 proved to be different. In August 2019, Millicent was diagnosed with cancer. Over the course of the next few months, she had two surgical procedures performed. In September, she said her last goodbye to her Hyatt Regency of Chicago coworkers. She fought tirelessly as her family and friends aided her in anyway that they could. December brought on some challenges but Mill always stated that if God woke her up, it was a good day. On December 31, 2019, Millicent went from labor to reward and ended this decade on earth to reside with the Lord in heaven. She was preceded in death by her parents, and two brothers Maurice and Claude. Millicent leaves to cherish her vibrant memories, her husband Gerald Haron; one daughter Crystal; one son Cortez (Tara); her sisters Pamela “Mella”, Orthria “Thee”, and Eleanor “China”; brothers William “Billy” (Louise) and Larry “LaLa”; sisters-in-law Ellen “Pinky” (Prentiss) and Brenda; brothers-in-law Frederick (Karen), Lawrence “Larry”, and Bo; grandchildren Charee, Rahmaan “Malik”, Makalya, Myanna, Meosha and Mercedes; great grandchildren Montreall and Major Cortez; Mill also leaves a host of special nieces and nephews, other relatives, special neighborhood friends and her Hyatt Regency Chicago family.

May 23, 1952, a perfect flower bloomed to Grady and Leanna Washington named Millicent &#8220;Mill&#8221;/&#8220;Millie&#8221;. Mill accepted Christ at an early age and was baptized at Progressive Baptist Church. She was a fine student out of... View Obituary & Service Information

The family of Millicent Haron created this Life Tributes page to make it easy to share your memories.

Send flowers to the Haron family.