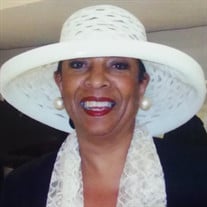 "A Woman of Substance" Milo’s parents, Edna Shepherd-Milo and Louis Cohen Milo, migrated north from Florence, Georgia choosing to start their family here in Chicago. At age 8, Milo’s family moved to New York. The family lived in Harlem upon first arrival, afterward settling into the Flatbush section of Brooklyn. Milo attended Erasmus Hall High School where she received her diploma for academic studies. Erasmus Hall High was the incubator for very many recognized talents with whom Milo shared classes. Along with her siblings, Louis (older brother) and “Doll” (younger sister), Milo studied music and art at the Brooklyn Museum Art Institute. Milo was a highly skilled artist; she produced and showed her works of drawings, paintings and sculpture. As a young adult, Milo met Melvin Gordon when they both worked at the Flieschman Gordon Company. They married and moved to Crown Heights. In 1964, they welcomed the birth of their son, Andre Frederick Gordon. Although their union later ended they maintained a healthy familial friendship. While building a small family consignment wig shop inside the Franklin Simon Department Store and building her career in the fashion industry both designing and modeling haute couture, she met and grew to love Wallace Harris who had recently moved from Philadelphia to begin a career in New York. They were a stunningly handsome couple who enjoyed working, dining and dancing their way through New York. They married and welcomed the birth of their son Lanz in 1971, whom she affectionately referred to as "my child". Milo loved her sons dearly and often spoke of the qualities that endeared her to them both. It was about this time that Milo began a career as an Interior Designer. She also began to favor working on the design of women’s suits and coats as a specialty. She was wildly creative and a highly skilled seamstress, often working designs from being ideas and transferring them straight into beautiful garments. Although Milo was a woman of many talents what endeared us to her most were her inner qualities, "the secret person of the heart". Milo had a unique ability to make everyone feel special and worthwhile. She always went the extra mile to help out. As a young woman, Milo met who would become her lifelong friend and traveling companion, Arlene Arcuri. They worked together at a shop making wigs and hair pieces for celebrity clients. In ways Milo didn't yet realize this friendship would impact the rest of her life. Arlene was one of Jehovah's Witnesses and would often speak with Milo about the Bible's promises during break periods at work and while traveling together. Arlene liked Milo because she was a very kind person and she didn't use bad language. They shared many memories and experiences traveling all over the world together. Milo really put her heart and soul into the love and care of her two sons, working diligently to make a happy home for the boys. In the later 1970s, Milo moved with her family back to the city of her birth, Chicago. It was around that time that she met Claudette Smith, one of Jehovah's Witnesses. Milo began studying the Bible with Claudette and was baptized as one of Jehovah's Witnesses on June 17, 1978. Arlene recalled Milo excitedly calling her to let her know that now she too was a Witness! Milo took her responsibility of carrying Jehovah's name and preaching about him very seriously, devoting 70 hours each month as a full-time pioneer minister. She also worked very hard on Kingdom Hall construction projects most notably as part of the tile crew and in disaster relief across the country and overseas. With all her previous accomplishments, in Milo's eyes this was the most important work she had ever done because it was close to her heart and pleasing to her heavenly Father, Jehovah. And like anything else she would do, Milo was very good at it. Milo was preceded in death by her parents Edna and Louis, her aunt Elna (her mom's twin sister), her brother Louis, son Andre Gordon and sister Daryle ("Doll") Challenger. Milo leaves to cherish her memory her husband Wallace Harris, son Lanz Harris, grandson D'Lanz Harris, nieces Tokiko Covington and Omowale Anmoin, a nephew Kyle Ingram and a host of many other relatives and loved ones. She will truly be missed by us all.

The family of Milo Harris created this Life Tributes page to make it easy to share your memories.