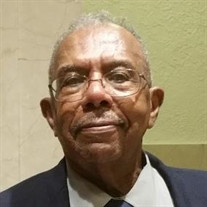 Mr. Monte M. Spencer was born March 12, 1940 in Chicago, Illinois to his mother Elizabeth McKendall and older sister Celestine Coleman. On October 1, 1960, Monte joined the United States Air Force and continued with the Air Force for four years before returning home. Upon returning to Chicago, Mr. Monte Spencer married Lillie C. Spencer on February 20, 1964. They enjoyed 33 years of marriage and had three children. Monty Spencer‘s wife Lillie Spencer became a baptized Jehovah’s Witness October of 1969. From watching Lillie and her children get baptized as Jehovah’s Witnesses, and display of Christlike qualities, Monte began to appreciate Jehovah. He began studying the Bible with Jehovah’s Witnesses in attending Christian meetings June of 2018. His love for Jehovah and the Christian foundation continued to grow and was strong. On March 7, 2020, while preparing for fishing season with his son Andre Spencer, Monte fell asleep. Lillie C. Spencer preceded him in death on November 3, 1997. Monte leaves behind four sons Jeffrey Spencer, Kevin Spencer, Kevin Spencer, and Andre Spencer; a daughter Shanta Spencer and her daughter Janelle Spencer - Owens, which Monte stepped into the father figure role and helped raise her like another daughter; a granddaughter Janila Aaron - Spencer plus a host of other grandchildren, nieces, nephews, cousins, and family members. Monte also enjoyed a long lasting friendship with a group of his childhood friends, regularly meeting up with them. Having been known by Jehovah, he now has the hope of being called by God and resurrected. Soon we will all say, “Death where is your victory? Death, where is your sting?” (1 Corinthians 15:57) Because these former things will have passed away.

The family of Monte Spencer created this Life Tributes page to make it easy to share your memories.

Send flowers to the Spencer family.