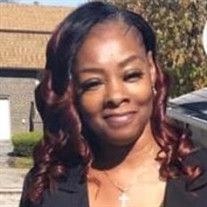 Nancy “China Doll” Marr was born October 29, 1969, at St. James Hospital in Chicago Heights, Illinois. Nancy was the oldest of 4 siblings and had an undeniable love for each of them. She was baptized at a young age and would later join True Light MB Church under Pastor James Morgan in August 2016, and Spiritual Israel Temple of Christ under Dr. Isaiah Simpson in January 2017. She was a graduate of Rich East High School in Park Forest IL. She was a dedicated housekeeper for many years and successfully raised her younger brother, baby sister, four children of her own, and countless others in love. She had a smile that would light up a room and a heart made of pure gold. Her strength, take care of business attitude, unconditional love, style, gift for gab and unselfishness put her in a league of her own. Well before her cancer diagnosis, life wasn’t easy for her, times were hard but she always made a way, and made due with what she had. Proof that she wanted to be a better person, be there for her kids and family started in the late 90’s by overcoming life’s battles that could have easily taken her life much sooner. Diagnosed with thyroid cancer in 2017, and given a life expectancy of 2 months, this warrior, superwoman, fought every single thing that was placed in front of her and she did it all with a smile on her face and a purpose in her soul. She would always say, “But you don’t know my God!” No matter what her struggle was, she always had an open heart, open door, and open mind. Her family often forgot about her being sick because she handled herself so well, taking care of everyone and everything just as she always had. Nancy peacefully transitioned on October 25, 2021, with her son, brother, cousin and Pastor by her side. She was preceded in death by her mother, father, father in love, brother, sisters, grandparents, uncles, cousin, son in love, and daughter in love.

Nancy &#8220;China Doll&#8221; Marr was born October 29, 1969, at St. James Hospital in Chicago Heights, Illinois. Nancy was the oldest of 4 siblings and had an undeniable love for each of them. She was baptized at a young age and would later... View Obituary & Service Information

The family of Ms. Nancy A. Marr created this Life Tributes page to make it easy to share your memories.

Send flowers to the Marr family.