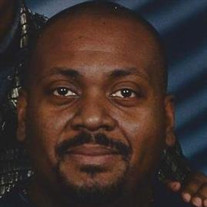 Nathaniel Dale White, affectionately known as “Nate”, was born February 10, 1960 to the union of Walter Sr. and Pearl White. Nathaniel was a graduate of Rich East High School in Park Forest, Illinois. He was a Licensed Emergency Medical Technician and a Certified Clinical Hemodialysis Technician. He graduated from the International Academy of Merchandising and Design in 2000 with an Associate of Science Degree in Interactive Media. Nathaniel gave his life to Jesus Christ at an early age and was baptized at Calvary Missionary Baptist Church under the tutelage of Reverend Dr. H. Donald Cockerham. Since the age of 10, he was a student of Kempo Karate where he toured the country and tournaments often winning them. He was a 2nd degree black belt with a specialty in weapons. On February 12, 2006, Nathaniel was united in holy matrimony to Tawania Parker, the love of his life, By Reverend Frank Sherrod at Harvey Memorial Community Church. Nathaniel was an electronic genius. He could put together any type of alarm system, and set up and troubleshoot any computer system. He started his own Christian entertainment company called Joint Heir Entertainment in 1997, and change the name to Joint Heir Conglomerates in 2018. His love of music caused him to become a sought after music producer. His music can be heard on Reverbnation, an independent music channel which features indie artists and allows them to share their art with the world. He would direct Harvey Memorial Community Church’s Drama Ministry, the Acts of Harvey Theater Ministry, in their first feature movie “The Wedding“, where he scored the soundtrack, acted in it and edited the movie. Nathaniel prided himself on the fact that our family always rose to the occasion to support and love one another with a ‘no matter what’ spirit. His sense of family extended to his church and community. He was a faithful member of Harvey Memorial Community Church under the teaching of Sr. Pastor Darrow D. Andrews. He served on the Media Ministry team as Chief Audio Video Engineer and as the Lead Cinematographer for the Acts of Harvey Theater Ministry. He often built church websites and paid for them himself. His presence encouraged many as he touched many lives. Nathaniel was an awesome man of God. A mighty Prayer Warrior and Intercessor. Many of his dialysis patients were comforted when they knew he was giving them their treatment for he’d tell them he was praying for them. He’d give them prayer books and scriptures to encourage them. Often times family and friends would get calls or texts. He was known to send words of encouragement or an uplifting scripture to his children reminding them of his love and dedication to them. His wife, Tawania, has said he would often be found walking through the house all hours of the night praying in tongues. On May 16, 2018, God called Nathaniel home. He was preceded in death by his father, Walter White Sr. and his sister Sharon Joy White-Fuller. Nathaniel leaves to cherish his happy memories and to embrace his legacy of love and family, his loving wife Tawania P. White; two sons Michael A. White and Jordan E. White; one daughter, Moriah J. White; his mother Pearl L. White; four sisters Mary Helen Street, Sylvia P. White, Juanita Sweatt and Patricia A. Young; his only brother Walter White Jr.; brother-in-law Henry and Myrtle Parker; sisters-in-law Kimberly D. Parker, Regina Parker-Johnson (Anthony) and Stephanie D. Parker; two very special and loving nieces Natira L. Baker (Morris) and Nia I. White; other nieces and nephews, relatives and friends far too numerous to mention.

Nathaniel Dale White, affectionately known as &#8220;Nate&#8221;, was born February 10, 1960 to the union of Walter Sr. and Pearl White. Nathaniel was a graduate of Rich East High School in Park Forest, Illinois. He was a Licensed Emergency... View Obituary & Service Information

The family of Nathaniel Dale White created this Life Tributes page to make it easy to share your memories.