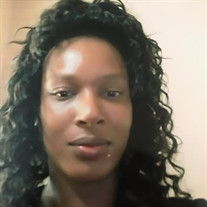 Neffatiera Loretta Wells made her arrival to the world in Chicago, Illinois on July 11, 1983 to the proud parents of Mary Wells and Lucious Richard Gregg. Neffatiera attended and graduated from Stephen F. Gale Elementary School. She attended Wendell Phillips High School and graduated from Field Lab High School. During her mother’s employment at the Forest Villa Nursing Home she was a faithful volunteer. After graduating high school, she was inspired to continue her education by successfully attending training programs for Forklifting and Construction Flag Worker. Neffatiera was looking forward to working with a pending future family business, “Faithful Housekeeping”. Unfortunately, she did not get to see her ID that was amongst her mail on Monday, January 20, 2020. She was raised and received her spiritual training and guidance in Holiness at the Old Landmark Church under the leadership of the late Apostle R.L. Mitchell. She was a very loving and caring daughter, mother, sister, auntie and to all other family and friends. Her soft-spoken personality that resembled her, late grandmother, Kattie Sallay. Neffatiera helped anyone she could and would always be there for her family and friends. She loved cooking delicious meals for her children. She had recently with excitement called her mom to tell her she had finally mastered making her dressing. She loved her children unconditionally encouraging them to value education and do their best. She was preceded in death by her father, Lucious Richard Gregg; two brothers, Terell Wells and Andre Wells; one sister, Shantell Wells; grandmothers, Kattie Sallay and Charlene Gregg; grandfather, Jesse James Gregg, Sr.; one great-grandmother, Alma Cooper; two uncles, Ed Cooper and Jesse James Gregg Jr. Neffatiera passed peacefully in her sleep on Sunday morning, January 19, 2020. Neffatiera Loretta Wells leaves to cherish her loving memories: five children: Sherrell Wells, Treyvon Wells, RayQuan Wells, Antione Davis, and Nevaeh Wells; a loving and dedicated mother: Mary Wells; five sisters: Lashanda, Mona, Anglice Renee, Sakena, and Charlesia Rodgers-Fuller who is currently serving in the US Army; one brother Jermaine Wells; three step-brothers: James, Robert, and Christopher; one step-sister Ushanda; and a host of nephews, nieces, aunts, uncles, cousins, and friends.

Neffatiera Loretta Wells made her arrival to the world in Chicago, Illinois on July 11, 1983 to the proud parents of Mary Wells and Lucious Richard Gregg. Neffatiera attended and graduated from Stephen F. Gale Elementary School. She attended... View Obituary & Service Information

The family of Neffatiera Loretta Wells created this Life Tributes page to make it easy to share your memories.

Neffatiera Loretta Wells made her arrival to the world in Chicago,...

Send flowers to the Wells family.