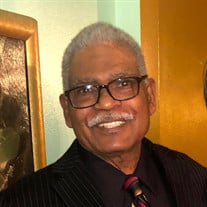 Norh Robinson Jr. was the eldest of 7 children. He was born in Attala County, Kosciusko, Mississippi on February 7, 1948 to the union of Norh Robinson Sr. and Jessie Inez Robinson. Norh received education in the public schools of Attala County. In 1968, Norh moved to Chicago, Illinois. The following year in September 1969, he met the love of his life Dorothy M. Thomas whom he would often affectionately call by her middle name, Marie. On May 2, 1970 he and Marie wed in Holy Matrimony. To this union were born two children, Norh Robinson III and Dorothy J. Robinson. Norh and Marie were blessed to truly be in love and enjoy each other’s company for 50 years, 7 months, and 6 days. After thoroughly studying the Bible and gaining an accurate knowledge of Jehovah God and His Son Jesus Christ, Norh made changes in his life in line with God’s standards. Seeing the benefits of living by such standards, he decided to dedicate his life to Jehovah and symbolized this dedication by water baptism on May 14, 1988. Norh loved Jehovah God and enjoyed spending time talking to others about what God’s Kingdom will accomplish in the near future. For many years, even before he retired, he would voluntarily spend at least a few months throughout the year as an auxiliary pioneer. Even when he did not auxiliary pioneer, he was always willing to lend support and encouragement to Marie & Jeanette in their full time pioneer ministry, which they will forever treasure. Although Norh was employed as a steel worker for 32 years, he was a skilled auto mechanic, something he did not receive training for. This gift enabled him to keep a lot of cars running for his family. Norh was also a quiet man of few words. However, he would often say things that carried a lot of weight and/or provided a sound solution to a problem or situation. Norh fell asleep in death on December 8, 2020. He is preceded in death by his parents Norh Sr. and Jessie I. Robinson. He leaves to cherish his memory: his wife Dorothy Marie; two children: son Norh III (Shaunell) and daughter Dorothy Jeanette; three brothers: Stanford (Beverly), Terral, and Kenney; three sisters: Lateria, Linda, and Jessie Mae; three grandchildren: Kalan, Zaria, and Jalan; one great-grandchild: Jace; and a host of nieces, nephews, and many other relatives, in-laws, and dear friends.

Norh Robinson Jr. was the eldest of 7 children. He was born in Attala County, Kosciusko, Mississippi on February 7, 1948 to the union of Norh Robinson Sr. and Jessie Inez Robinson. Norh received education in the public schools of Attala County.... View Obituary & Service Information

The family of Norh Robinson created this Life Tributes page to make it easy to share your memories.

Norh Robinson Jr. was the eldest of 7 children. He was born in...

Send flowers to the Robinson family.