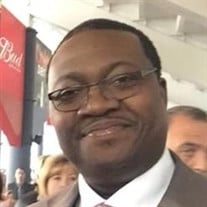 Norman James Jackson was born July 18, 1973, to Norman Young and the late Alma Jackson. He was affectionately known by his family as “Boo” or "Storm", to many friends. Having an undeniable love amongst his parents, Norm was always known as a “Momma’s Boy” of which he was very proud of and he absolutely adored his Father, knowing whenever he needed him, he was always right there. He had an unparalleled connection between his siblings: Crystal (Robert) Smith, Jason Young, Georgio Jackson, Jessica Billingsea-Young, and Ariane Jackson. They remember him as a mischievous child, always being the first to get in trouble. Growing up in close contact with his aunts and cousins, he formed very special bonds with them. It was because of this bond, that in a sense, he gained second moms' and more siblings. The love he received from his family is what molded him into the man he became. At a young age, Norman’s Mother taught her children about Jehovah God and all of His wonderful promises for the future found in His word the Bible. As he got older, Norm really took the time to study the Bible for himself, learning that Jehovah is the Universal Sovereign and that His son Jesus Christ is serving as His King. Knowing these truths, moved Norm to dedicate his life to Jehovah and symbolize that by water baptism on December 1, 1995. Since childhood, Norm was an uncanny artisan, and shared those various interests with his nephews. He was able to create impeccable pictures with both crayons and pencils that looked as if they had been actually painted and could freehand any image from sight. Norm was also gifted with a beautiful singing voice and had a knack for doing impersonations, especially of his Uncles. After graduating from Kensington High School in 1992, Norm found another way to show off his artistic skills. He enrolled in Barber School. There he was able to obtain the basic techniques and skills needed for barbering. He took those techniques and mastered them making him a well sought-after barber in the Buffalo area. Norm was a visionary and was able to cut hair with razor sharp precision while having the poise of a sculptor. His customers appreciated his talent so much that those who left the area would actually travel back to have Norm cut their hair. His generosity and compassion for others led him to make house calls to service customers that were elderly or infirmed. Bert’s Barbershop, where Norm worked for over 25 years, was a huge part of his life. Although Norm was known to be a jokester, he always presented himself in a cool and low-key manner. Reserved until a topic piqued his interest, then his voice came alive and filled the room with his hearty laugh and corny sense of humor as his nieces would say. On December 31, 2012, another milestone took place when Norm married the love of his life Britt (Warr) Jackson. Their love of movies, music and comics drew them together. If anyone would have heard some of the conversations about these things, you would have thought that they were quite the nerdy couple but perfect nonetheless for each other. The most important and heart warming conversations they would have were spiritual in nature. Such as, Jehovah’s creations. They also found great encouragement in the thought of Jehovah being able to see past our imperfections and focus on what our potential is. These conversations and special moments will be truly cherished. Within this beautiful union, Norm accepted the role as a second Father to Ricardo Marion Smith III (Tahrae) and Raven Smith aka Beans. Norm’s heart overflowed with love for his grandchildren: MiaRose (his Peanut), Tahmia, Ricardo Marion IV, and Mari. As well as, inheriting countless family and friends. In his last days, Norm’s faith in Jehovah and the promise of a resurrection, found at John 5:28, was strongly reaffirmed. He knew that he would see his loved ones again in paradise. Britt remained by his side until he took his very last breath. Before he closed his eyes for the last time he told her, “make sure you are there when I wake up.” He entered into rest on March 9, 2022 at the tender age of 48. Norm will be deeply missed by his family, friends & the community. Any donations can be made to the following Cashapp - $Babysugahs Zelle - 716-563-1969 PayPal - @BJackson42 Venmo - @Norm-Britt-Jackson

Norman James Jackson was born July 18, 1973, to Norman Young and the late Alma Jackson. He was affectionately known by his family as &#8220;Boo&#8221; or "Storm", to many friends. Having an undeniable love amongst his parents, Norm was always... View Obituary & Service Information

Send flowers to the Jackson family.