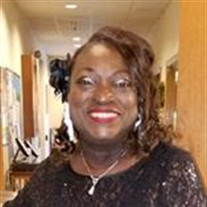 Odell Jackson was born on July 22, 1953 to Ivory and Ruthie Mae Harris in Belzoni, Mississippi. Preceding her in death her mother Ruthie Mae Harris; her father Ivory; and her siblings: CoAnn Harris, Bo Ivory Jr, Theo Harris, Richard Harris, and Lee Andrew Harris. Odell received an education at Humphrey County High School in Belzoni, MS. She graduated in 1971. She later moved to Chicago, Illinois where she later met and married her husband, Gregory Jackson, on November 17, 1979. From this union they bore four children. She dedicated her life to Almighty God as a Jehovah’s Witness on December 28, 1979. She was always present at her Christian meetings, auxiliary pioneering, looked out for the interest of others, and was very encouraging and loving toward all. Despite life's ups and downs, she remained faithful until death. She found a lot of joy in spending time with her family and friends, taking pictures, traveling, sewing, shopping, and arts & crafts. Growing up, Odell was a dental hygienist and home health care aide. She held multiple positions throughout her lifetime; including being a foster parent, until she found her passion as a Child Welfare Attendant at Chicago Public Schools (CPS), where she later retired in 2017. Odell was a devoted wife, mother, grandmother, role model, and mentor. Odell leaves to cherish her memory her husband: Gregory Jackson; and five children: Greg Jackson, Jr. (Marchell), Shanetha Jackson, Tera Levy (Jeremy), Dwayne Jackson, and Tiffany Jackson. Twelve grandchildren: Mark, Shaynia, Benjamin, Desiri, Tarurice, Frederick Jr., Daija, Rebecca, Dayani, Noah, Tyron, and Isaiah; her three siblings: Dorothy Elder (Cleotha), Leo, and Corine (Eddie); and a host of nieces, nephews, cousins, relatives and numerous friends.

The family of Odell Jackson created this Life Tributes page to make it easy to share your memories.

Send flowers to the Jackson family.